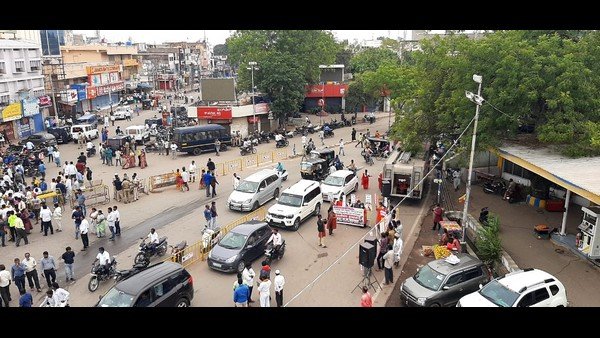 An entire Ballari District bandh that was organized on Thursday regarding the discontent over the bifurcation of the District and the formation of new Vijayanagara District by the Akhanda Ballari Horata Samithi, a conglomerate of different Dalit and pro-Kannada organizations, seems like a failure.

Though life went on as usual in a majority of areas in the city, a few localities, including Moti Circle, Gadagi Chennappa Circle and Bengaluru Road, saw good response as commercial establishments closed down for a few hours. Public transport system, including the city buses and autorickshaws, remained largely unaffected.

A few activists associated with Karnataka Jana Sena offered special puja to Kanaka Durgamma, the presiding deity of Ballari, and prayed to her to keep the district undivided. As the day began, activists belonging to different organisations gathered at the Gadagi Chennappa Circle holding banners and placards.

As the crowd swelled by 10 a.m., the agitating activists formed a human chain at Gadagi Chennappa Circle blocking all roads connecting the traffic circle with the rest of the city. They cooked food at the traffic circle and ate it. The agitation disrupted traffic movement for some time.

The agitating people then marched through the major roads in the city raising slogans in opposition to the division of the district. Kudtini Srinivas, Darur Purushottam Gowda, Pannaraj Sirigeri, Yariswamy, Chanal Shekhar, Sidmal Manjunath, Satya, Sanganakallu Krishnamurthy, A. Manayya, Minahalli Tayanna, Tapal Ganesh, Gangavathi Veeresh, Lingaraj, B.M. Patil, Sanganakallu Vijayakumar and other leaders representing different organisations were in the forefront of the agitation. A few leaders participated in the agitation riding on horses.