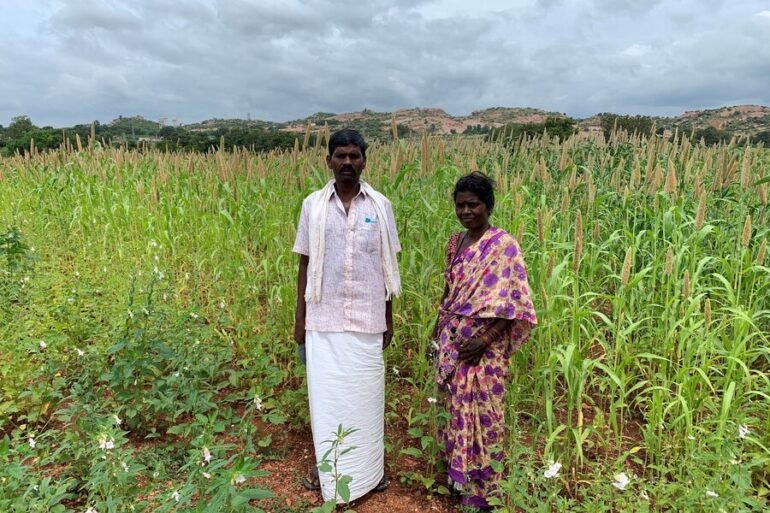 For years, Indian Karnataka farmer Chape Hanumaiya from Papinayakanahalli struggled to grow anything on his tiny plot of land – it was caked in the thick, red dust drifting from the iron ore mines that surrounded it.

But today, Mr Hanumaiya and his wife are about to harvest pearl millet and sesame crops thanks to a pilot project that seeks to fight migration and boost food security around the southern city of Hosapete, the heart of India’s iron ore industry.

In India, about 15,000 acres of farmland have been contaminated by dust from iron ore mines. But a pilot program in the city of Hosapete is bringing barren farmland back into production and boosting food security in the process.

More than 6,000 hectares (about 15,000 acres) of land, both private and community-owned, have been blighted by iron ore mining in India, affecting nearly 30,000 people, according to data research agency Land Conflict Watch.

Mr Hanumaiya’s land was revived under a sustainable cooperative agriculture scheme led by the Sakhi Trust nonprofit, which works with communities affected by mining in the area and encourages organic farming.

India is the world’s fourth-biggest producer of iron ore, the key ingredient in steelmaking, and demand for the commodity is expected to grow as the global construction sector rebounds from COVID-19.

That could prompt a surge in output, putting additional strain on local farmers and fueling environmental damage in mining areas.

Chape Hanumaiyya and his wife Ningamma stand on their farmland in Sandur telling thanks to the pilot project aimed at restoring soil health, they will have pearl millet and sesame harvest for the first time in decades