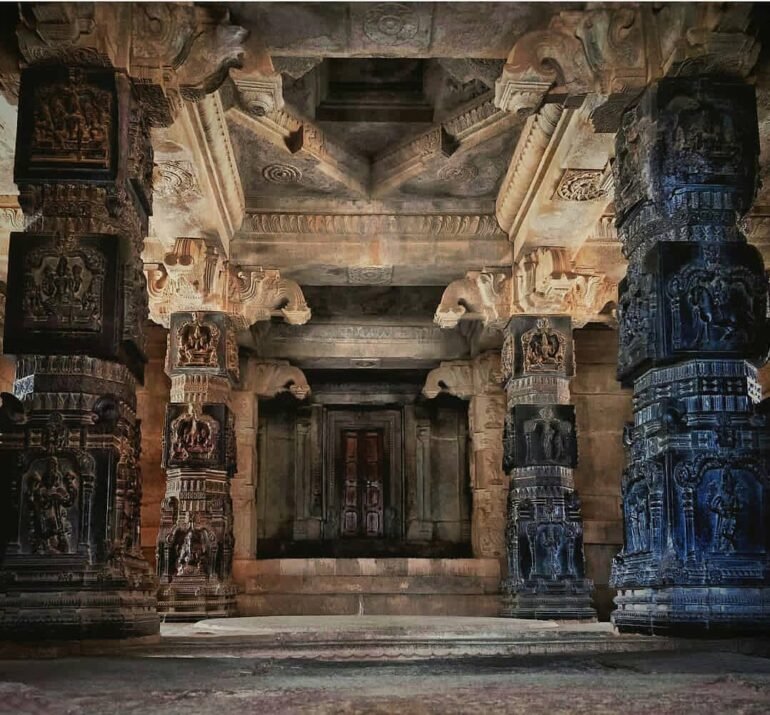 Hazara Rama Temple is the first monument on the right, when you enter the innermost citadel area from the main road, the path divides into two- the left one leads to the Zenana enclosure. This is one of the well-preserved and an ornate monument in the royal zone. It is dedicated to Lord Rama, the 8th incarnation of Lord Vishnu, but as the sanctum now remains empty, it cannot be guaranteed about the past revelations.

The name ‘Hazara Rama’ means ‘a temple for thousand Rams’, but the Telugu historians express their views as ‘the Telugu word for ‘hajaramu’ means ‘an entrance hall to palace and a temple that stands at the entrance to the quadrangle that has the ruins of the main palaces. Malyavanta Raghunath hilltop and the Matanga hills can be viewed from this temple.

What’s So Special About This temple?

The thing that makes this temple a very special experience is the carvings on the outer walls that tell the story of Ramayana in a unique graphic form. There are 108 scenes from the Ramayana carved in panels like divided by elegant pilasters with lotus brackets that begin with Valmiki narrating the story and King Dasaratha’s fire sacrifice praying for a son. Chiseled with amazing delicacy these exquisite bas-relief carvings are like a picture gallery of the epic.

One panel shows Sita’s swayamvar in the Hazara Rama Temple, with men struggling to carry the giant bow of Shiva, and another where Ravana is changing from sadhu into a ten-headed demon. Among the others is Ram sitting under a tree with Lakshman standing beside him, as he gives his ring to Hanuman; another of Sita giving her hair ornament to Hanuman and the Monkey god’s leap over the sea.

The forms of the ten avatars can of Lord Vishnu can be seen everywhere, the young Krishna holding a a ball of butter is among the most charming and they can be seen even on the outside of the precinet walls.

The Hampi landscape is redolent with the episodes from the Ramayana and it is probably not a coincidence that one can find many structures with similar cravings on stones and pilasters as found at Hazara Rama Temple. The main shrine has pyramidal domes on the roof and inside there are four polished black stone pillars with the carvings of Ganesha, Durga, and Hanuman. The amman shrine has two storeys with a wagon-shaped roof and must have housed an image of Goddess Lakshmi as she is the consort of Vishnu.

Krishnadevaraya was a Vaishnava and it is believed that they must have worshipped here and the Kalyana Mandapa built by him is the most ornate structure in this temple courtyard. There is also a small shrine dedicated to Ugra Narasimha, the lion-headed incarnation of Vishnu. There is a narrow path that connects the temple to the palace area and was probably used by the kings to visit the temple.

The Hazara Rama temple has a sprawling lawn on its northern side. There are two huge gateways that give access to the temple compound. The interior of the temple has ornately sculpted columns. 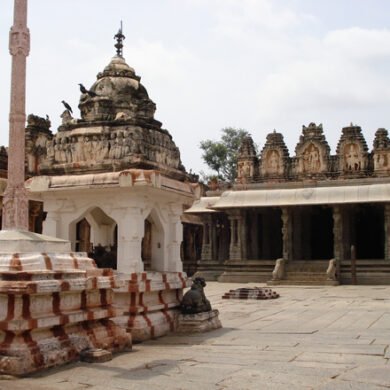