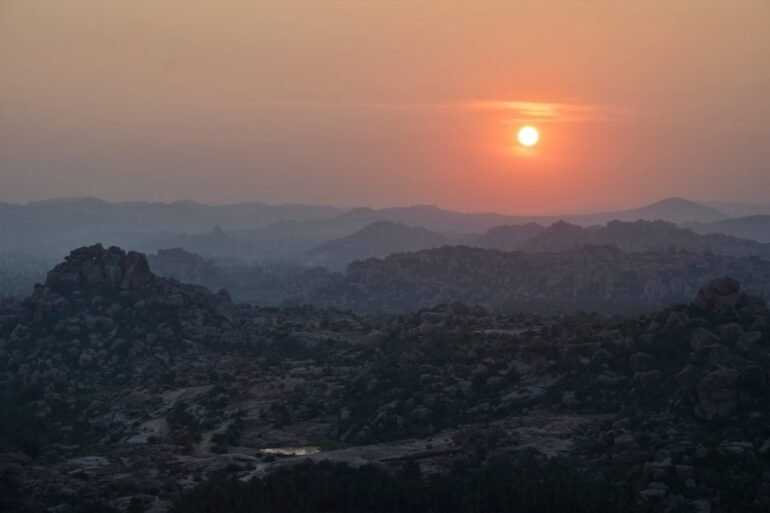 Matanga Hill, In the center of Hampi with the highest altitude point, low ridges and piled boulders lie the Hill in the ruins of Hampi, It is the best location to get an aerial view of Hampi and its environs. It is a panorama that you will never forget, When you clamber up to the rocky summit of Matanga hill you could pause to look around to get an unparalleled view of the ruins of Vijayanagara.

One Kilometer from Hampi’s bus station, the Matanga Hill is located at the eastern end of the Hampi Bazaar and is easily accessible by road till the foothills. The view from the top is interesting, especially from the eastern side where you can get an aerial view of the Achyuta Raya’s Temple complex; at the south, the cart trail and Turthu Canal winding through the banana plantations.

According to mythology, Matanga Hill is also considered as one of the holy places described in the Ramayana as the base of Saint Matanga. It is also described as the place where Sugreeva benefited from the magical protection of the sage Matanga who had placed a curse of death on Vali if he dared to enter the area of Matanga Hill.

Being the highest peak in Hampi, the hill is a trekker’s delight and offers pleasing views of the entire town below. There are many trekking paths that lead to the top of the hilltop where the Veerabhadra Temple is located. The climbing could take around 30 minutes to complete. The rooftop of the Veerabhadra Temple is the ideal place for a beautiful sunrise and sunset view. From the top of the hill, one can view the Achyutaraya Temple, Tungabhadra River, Virupaksha Temple, Hampi Bazar, and surroundings.

The best way to experience Hampi’s magnificence in entirety is to climb up Matanga Hill and watch the sunrise over this ancient kingdom, capital of the formidable Vijayanagara dynasty laid to ruins by its five allied sultans from the Deccan. On the way down there’s a small cave marked with a red doorway where it is believed that Sugreeva, ruler of Kishkinda was hidden. Matanga Hill is one of the best places to visit in Hampi. Matanga Hill is one of the best sunrise and sunset spots in Hampi.

In Hindu mythology, Matanga Hill is considered an important location. It was a heritage place of Sage Mathanga, It is also said that the Monkey king Vali killed a demon called Dundhuvi and threw the corps on to the sacred Hill, Angry by this act Matanga threw a curse on Vali that he could never step onto the soil of this sacred hill.

A Few years later, Mayavi, the son of Dundhuvi challenged Vali to chase Mayavi into a cave. Vali’s brother then took charge of this cave’s entrance and after some time thinking that Vali was killed, Sugreeva closed down the gates. Vali then later emerged from the cave and tried to kill Sugreeva for the betrayal but on the arrival of Lord Rama, Vali was killed and Sugreeva was crowned as the king of monkeys.