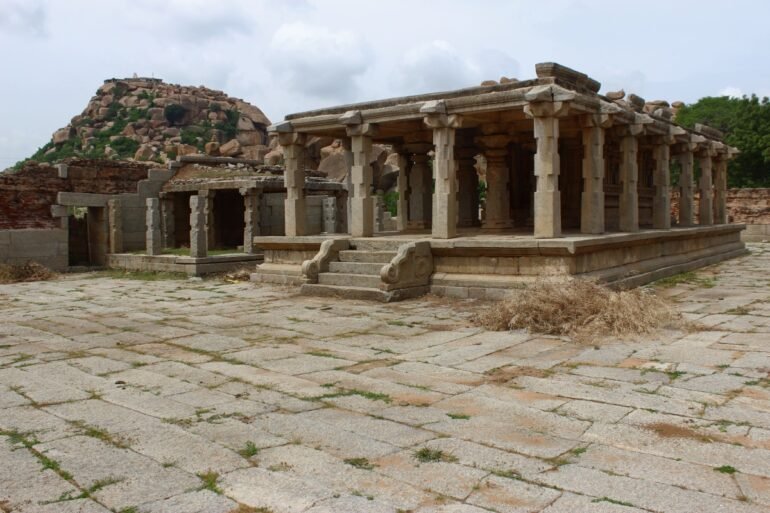 Varaha Temple which is located at the northern end of Courtesan Street is one of the most impressive temples in Hampi prominent especially for its architectural beauty and carvings on the wall. The temple is dedicated to Varaha Swamy who is one of the ten incarnations of Lord Vishnu. The structure of the temple is protected under The Ancient Monuments and Archaeological Sites and Remains Act, 1958. The temple is visited by a lot of tourists every year.

Myths And Facts Of Varaha Temple

Varaha Temple was built in the 13th century during the reign of the Vijayanagara Empire. It is considered one of the most religious locations in Hampi as the temple has its own significance as Lord Vishnu is considered one of the most popular deities of the Hindus so his incarnation of Varaha was also much-loved b the people of Hampi. Like most of the structures in the ruins of Hampi, the history and information of this temple could be not gathered.

The Varaha Temple has a remarkable architecture of its own which is fascinating for the tourists visiting here. The temple’s complex is a rectangular area bounded by a wall and has a huge entrance tower which adorns one side of the complex, The entrance tower present reflects the grandeur and beauty of the temple which existed years ago.

This east-facing temple is located at the bifurcation of a major riverside path. The trail that connects Kodandarama Temple to the Vitthala Temple passes along the southern wall of the Varaha Temple. At this point a branch trail heads southward to the Achyutarara Temple. From Varaha Temple you can spot the Ranganatha temple just across the path in front and Achyutaraya’s Temple tower at the end of the Courtesans’ Street.