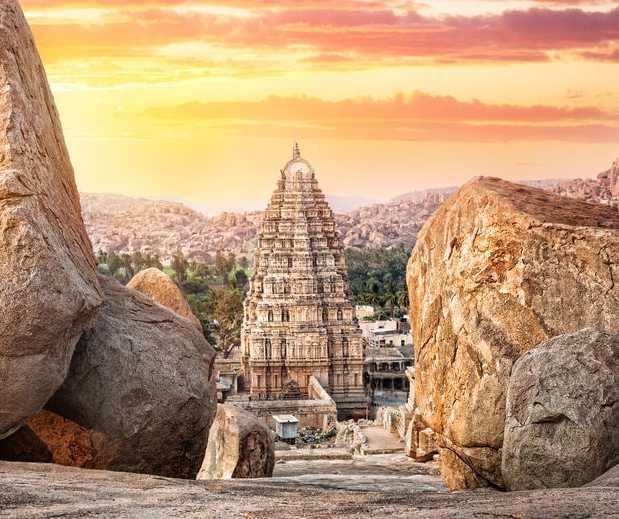 Why Is Virupaksha Famous?

Virupakasha Temple is believed to be functioning uninterruptedly ever since its inception in the 7th century AD that makes this structure, one of the oldest functioning temples in India. Virupaksha means eyes without the form; many people use this word as a name. Virupa means no form, and aksha means eyes, it means eyes without the form. Virupaksha temple is the oldest and the principal temple in Hampi.

It is the holiest and sacred retreat of Hampi. The Virupaksha temple has survived through the years and never ceases to prosper. It is still pristine amidst the ruins that surround it.

It attracts large groups of people in the month of December. The yearly chariot festival is conducted in the month of February. This temple is located on the south bank of the river Tungabadra, just next to where the local bus drops you. This area, in general, has been a quintessential pilgrimage center for the worshipers of Lord Shiva. Virupaksha temple is equally sorted after by the tourists and pilgrims. The annual festivals attract huge crowds of both types.

The original worship place was only a few separate humble shrines (believed to be as old as 7th century) housing the image of the god and the goddesses. Over the centuries the temple gradually expanded into a sprawling complex with many sub-shrines, pillared halls, flag posts, lamp posts, towering gateways, and even a large temple kitchen. You access the temples main entrance tower through the chariot street in front now popularly called the Hampi Bazaar.

The Virupaksha temple’s chronicle is unremitting from around the seventh century. Virupaksha-Pampa retreat was existent since a long time here. There are several inscriptions about Lord Shiva which were engraved in the 9th century.

It started off as a little shrine and later developed into a huge complex during the Vijayanagara rule. There is evidence that indicates additions were made to Virupaksha temple during the later years of the Hoysala and Chalukyan sovereignty.

The devotional group of Pampa and Virupaksha did not come to an end with the devastation of Hampi in 1565. The temple is worshiped even today and has persisted all over the years. There were extensive renovations done in the early 19th century that include the addition of towers and ceiling paintings.

The east-facing giant tower (Gopura) leads you to the first courtyard of the temple complex. This pastel painted 9 storied towers with a pair of cow horn like projections on top is the most prominent landmark in Hampi. The lower two tiers of the towers are made of decorated stonework.

The progressively diminishing superstructure is made with brick and mortar. All around the exterior of the first tier spots many interesting stucco figures. You may get to some distance from the base of the tower to see all of them.

The most striking feature of this court is the central pillared hall known as the Ranga Mandapa added to the temple complex in 1510 AD by Krishadeva Raya. Two mythical lion-like creatures form the balustrade for the entrance to this elevated open pavilion. As you enter the pavilion on your right is an inscribed plaque with Nandi image on top probably explains the royal patronage the temple enjoyed.

This hall with 5 aisles and 38 pillars is used for temple rituals including the marriage ceremonies. The highlights include rows of pillars shaped with rampant lion-like mythical creatures (Yalis) standing on aquatic creatures (Makara or Crocodiles). Warriors seem to ride on these ferocious-looking creatures.

The mural panel on the central portion of the hall is one of the few remains of this form of Vijayanagara art. Most of it is based on godly themes except the one at the eastern end.

The ceiling of this inner hall is decorated with an open lotus motif
The sanctum contains the idol of lord Virupaksha in the form of a Linga (A phallus image). A corridor surrounds the sanctum.

Surrounding the Virupaksha temple are plenty of dilapidated mandapams. There was an ancient shopping center interlined with mandapams in front of this temple. The ruins of it stand today.

Eye Map Of The Temple Complex

One directly enters into the first courtyard through the tower mentioned above. This courtyard mainly houses a pillared hall called 100-column hall at the far left corner, Kalyanamantapa at the far right corner, administrative offices, the ticket counter, a police outpost, and even an old well.

A kitchen complex projects out of the compound overlapping the two courts at the south wall. A narrow passage on the wall of the 100 pillared halls gives access to the kitchen. A water channel system connected to the nearby river is built into the floor of the kitchen complex. The remains of its feeding channels outside the southwest corner of the temple corner can be seen.

A bit east along the cloister, you can spot a flight of leading to an underground chamber. This contains the shrine of Pataleswara, a form of Lord Shiva. Further east is the shrine of the planetary deities

Further west, beyond a small inner hall, is the sanctum sanctorum of Lord Virupaksha. Two 4 armed guardian deities, about 8 feet tall, stand on either side of the entrance to the inner hall.

Further up the stairs, you would come out of the temple campus. Nearby is a shrine dedicated to the founder sage Vidyaranya. Just before the exit on the right side, you would find a dark chamber with a slit on the wall. The sunray pass through this slit forms an inverted shadow of the main tower on the wall, a kind of pinhole camera effect created with stonework.

Back to the main temple, the giant north tower, called Kangiri Gopura, near the main sanctum leads to the temples sacred pond, the Manmantha Tank and a series of shrines. Altogether you need at least 1 hour to see this temple complex. If you feel so hire a guide who would bump on you as you approach the main entrance tower (pay Rs50).

You can witness the daily temple rituals and ceremonies in the mornings and evenings. Temple opens before the sunrise and closes in the night. Usually, the sanctum is closed in noon. So entry into the campus may not be possible at that point in time.

Prime Advices For The Tourists