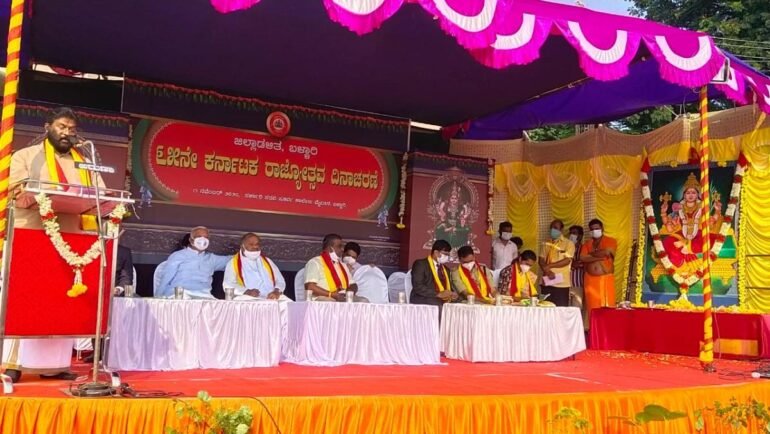 The 65th Karnataka Rajyotsava celebration in Ballari took place with the remembrance of Pilwan Ramadan Saab’s Sacrifice during the Karnataka Unification struggle in 1956. The minister of Forest and ecology the state, Mr. Anand Singh, while addressing the gathering recalled the brave sacrifice of Ramadan Saab.

Speaking on the occasion, he said that, like Hampi, which specializes in the History and culture of the country, Ramadan saab played an important role in the unification of Karnataka speakers.

Mr. Anand Singh also added “The country was liberated by the great freedom struggle, but the fists of many rulers were torn apart. The struggle to unite the people of Karnataka was also worth praising and remembering on this auspicious occasion of Rajyotsava. This unification encouraged the formation of any linguistic provinces and also was a significant milestone in the history of Karnataka. Maincluding Alluru Venkataramaya and deputy Channabasappa also contributed majorly into the creation of separate provinces.”

“It is exciting that the poetry emerged in Karnataka in the initial stages, while other languages were still toddlers. The importance of history which is held by the Vijayanagara Empire is also impeccable. The Karnataka state is a confluence of different creeds and sects.” the minister proudly acclaimed.

The minister who lead the lines of Kuvempu’s ‘Kannada Dindima’ poem said ” Hampi is proud to have created a golden age in Indian History. Let everyone strive for the development of the district, which has got valuable mineral resources.”

Activists of the Navakarnataka Yuva Shakthi organization built a huge Kannada flag, 6 feet wide, and 65 feet long on the ramparts of the historic three-round fortress of Rajyotsava Pratibha Nagar.