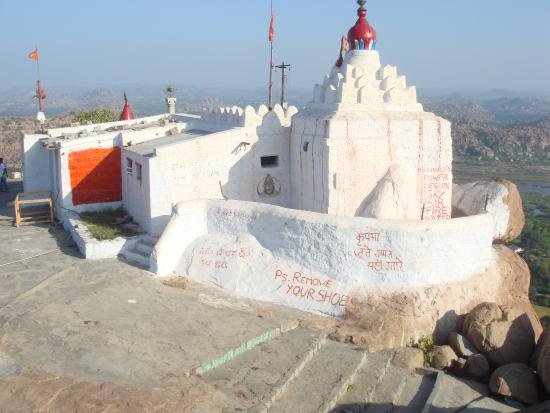 Yantrodharaka Hanuman Temple was built by the Dwaita Philosopher and the Rajguru of the Vijayanagara Empire, Sri Vyasaraja about 500 years ago. It is located nearby to the bank of the Tungabhadra River and around 2Km away from the Virupaksha Temple.

This temple is considered the second most important shrine dedicated to Lord Hanuman in Hampi. Also, the position of Hanuman’s idol makes it unique which is different from any other image of Lord Hanuman which could be found in Hampi.

History Of The Yantrodharaka Hanuman Temple

According to most of the Historians, this was the place where Hanuman and Lord Ram had met for the first time and so this temple was built here. But, others believe that Sri Vyasaraja used to draw the image of Lord Hanuman with charcoal on the rocks and prayed to Lord Hanuman here so it was built here.

Its also said that by the time Sri Vyasaraja used to finish his prayers, the picture he drew used to get disappeared and then at a time when the same happened for 12 days in a row, he pleaded to Lord Hanuman to appear before him and Lord Hanuman had appeared before him.

Also, further historians say, when Lord Hanuman had appeared before him he asked Sri Byasaraja to constrain him a six-sided amulet and build a temple in this area.

This is the place where the famous Yantrodharaka Hanuman Stotram was written. It’s believed by the devotes here that chanting the sloka thrice a day for six months will fulfill one’s wish and further the devotes say that one needs to chant every word of the sloka with utter determination to fulfill ones wish.

Architecture Of The Yantrodharaka Hanuman Temple

The idol of Lord Hanuman present here is in a meditative state instead of standing with one arm raised as most of the idols in India and the idol is circled with a hexagonal amulet. Also, the idol is surrounded by 12 monkey idols, illustrating the 12 days of prayer. Every monkey is holding the tail of the next while facing the opposite of the Lord Hanuman.

Engraved on the inside of the amulet are the seed syllables on which the great ascetic had once prayed. All of this was structured on a single flat stone boulder which is about 7-8 feet in height. On the right-hand side prior to the Hanuman idol in the temple, there is an idol of Lord Ram & Sita and it’s said that it’s the spot where they met for the first time. 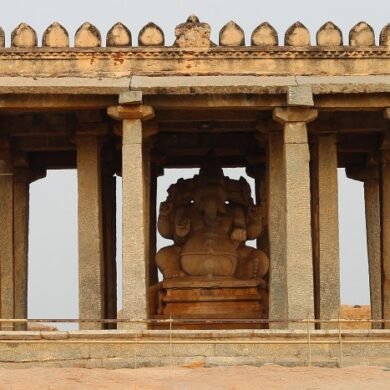