Two dead in accident at Hospet (Mariyammanahalli) – Was the car driven by minister R Ashok’s son? 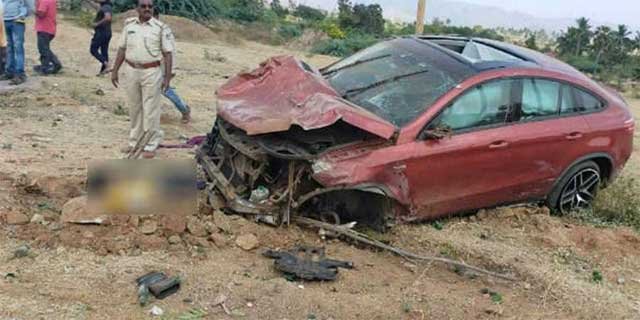 Two people died in a car accident that took place near Hospet in the district three days ago. Now it is being alleged that the car was reportedly driven by Sharath, son of influential state BJP minister R Ashok.

The car which caused the accident has KA 05 MW 0357 number plate on it. It is a high end car from Mercedes Benz. Accident occurred on Monday, when this car, which had five occupants, was going back towards Bengaluru after sightseeing around Hampi in the district. During that time, the accident has taken place near Mariyammanahalli on the outskirts of Hospet.

Son of R Ashok, who had injuries to his head in the accident was reportedly taken to Bengaluru, it is learnt. It is also said that the name of the driver is mentioned as Rahul in the FIR and not Sharath.

The car which met with the accident is said to be in the name of National Public School of Uttarahalli in Bengaluru. This car belongs to R Ashok, it is learnt. A case in this regard is registered in Mariyammanahalli police station.

‘No relation with the car in accident’ – Clarifies minister R Ashok

Revenue minister R Ashok said that there is no connection between him and the car that was involved in the accident at Hospet in Ballari district in which two people were killed. The minister also said that his son was not driving the car.

Responding to the accusation Ashok said, “Two innocents have lost their lives in the accident. This is really tragic. However, the car that is involved in the accident has no relation with me. In addition, my son was not driving the car.

“I am not responding as a minister. But certain matters are published linking me to this car accident in media. Investigation is on. I am confident that the truth will emerge after the inquiry. Law is equal to all. No one is above the law. Erring persons should be punished,” he said.

In the car accident that took place at Mariammanahalli at Ballari, two pedestrians by the names Ravi Naik and Sachin lost their lives. It was being said that Sharath, son of revenue minister R Ashok was at the wheels when the accident took place. In addition, the police were also silent on this mishap. All this led to the spreading of many rumours. However, Revenue minister R Ashok had categorically denied having any relation with the car that was involved in the accident and also said that his son was not driving the car.

SP of Ballari has also clarified that the car which met with accident was driven by a person called Rahul and not Sharath, son of minister R Ashok, as mentioned earlier. SP also said, “Rahul was driving the car when the accident took place. Sachin, a pedestrian lost his life while being taken to the hospital. Rahul is also seriously injured in the accident and was taken to Bengaluru for higher treatment.”

Rumours were rife in Ballari district that the car which met with accident was registered in the name of National Public school of Bengaluru and was driven by son of revenue minister R Ashok. However, his name was not mentioned anywhere in the FIR. Now the clarification by SP of Ballary has put an end to all the rumours. Further investigation is on.

In a shocking incident, the Karnataka police have allegedly tried to hush up an accident case involving the son of revenue minister R Ashok.

Two persons, including a pedestrian and a passenger in the car, were killed in the incident which took place on February 10 in Mariyammanahalli near Hospet in Bellary district.

According to sources, minister R Ashok’s son Sharath had been to a resort near Hampi to celebrate his birthday. It is said that the accident took place while he was returning in his Mercedes Benz (registration number KA 05 MW 0357) with his friends.

Sources said that Sharath was allegedly in the driver’s seat and was speeding. He lost control of the wheel near Durga petrol bunk on National Highway 50 and hit a local youth Ravi Naik, who was drinking tea. Ravi Naik died on the spot. A friend of Sharath named Sachin who was sitting in the seat beside the driver also succumbed to injuries.

When the registration number of the car was traced, it was found to be registered in the name of a reputed educational institute whose franchise is held by the minister, according to sources.

Minister Ashok denied that his son was in the driver’s seat, and that he was unnecessarily being dragged into the controversy.

Home minister Basavaraj Bommai said he would get the details and then react on the incident.

Minister Ashok added that he did not want to state anything about the incident since an investigation was being carried out. “The law is equal for all and as a minister I don’t want to influence anything. My son’s name is not in the FIR. There is no connection between us and the car which met with the accident,”  he maintained.

When asked specifically whether his son was there in the car, Ashok answered that since an investigation was going on, he would not make any statement at this point.

“There are two deaths in the incident. One pedestrian and another boy in the car have lost their lives. The localities have shifted them to hospital and an FIR was booked on the same day,” he maintained.

Bellary superintendent of police C K Baba clarified that there was no negligence or dereliction of duty by the police in the case. R Ashok’s son was not there in the car which met with an accident, he added.