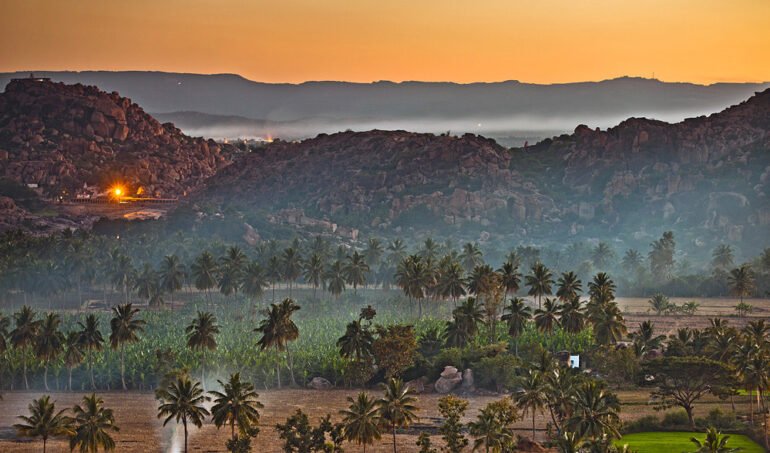 According to Karnataka, Hanuman was born at Anjanadri in Kishkinda, near Anegundi, in Koppala district. But Andhra Pradesh has another story. The state claims that the Hanuman was born in one of the seven holy hills of Tirupati which is also called Anjanadri.

The TTD declared on Saturday that an “evidence-based” book to “prove” that Lord Hanuman was “born” on one of Tirumala’s seven sacred hills, home to the Sri Venkateswara Swamy shrine, will be published on Ugadi, the Hindu new year, on April 13.

Though archaeology and history experts have dismissed the TTD’s argument, the Karnataka unit of the Vishwa Hindu Parishad has suggested that the TTD take more time and consult with scholars and religious leaders before making any decisions.

Historians agreed that Hampi, or the region surrounding the Vijayanagara dynasty’s former capital, is Kishkindha Kshetra. They believed that not only was Anjanadri at Hampi the birthplace of Anjaneya, but that prehistoric rock paintings found in the area depict people with tails.

Wanting to have Hanuman on their side, an expert committee has been constituted by the famous Tirumala Tirupati Devasthanams. This committee is scheduled to submit its preliminary report on Tuesday and the final version on April 21, the day of Ram Navami. The panel comprises scholars, archaeology experts and an Isro scientist.

“We’ve mythological and archaeological evidence to prove Anjanadri in Tirupati is the place where Hanuman was born. The expert committee will submit the draft report on Ram Navami, following which we will invite public opinion on this,” said KS Jawahar Reddy, executive officer of TTD Trust Board, was quoted in the media.

But pre-empting moves by AP, the Karnataka government plans to declare Kishkinda’s Anjanadri as Hanuman’s birthplace. Rural development and panchayat raj minister KS Eshwarappa is scheduled to lead a team of ministers.