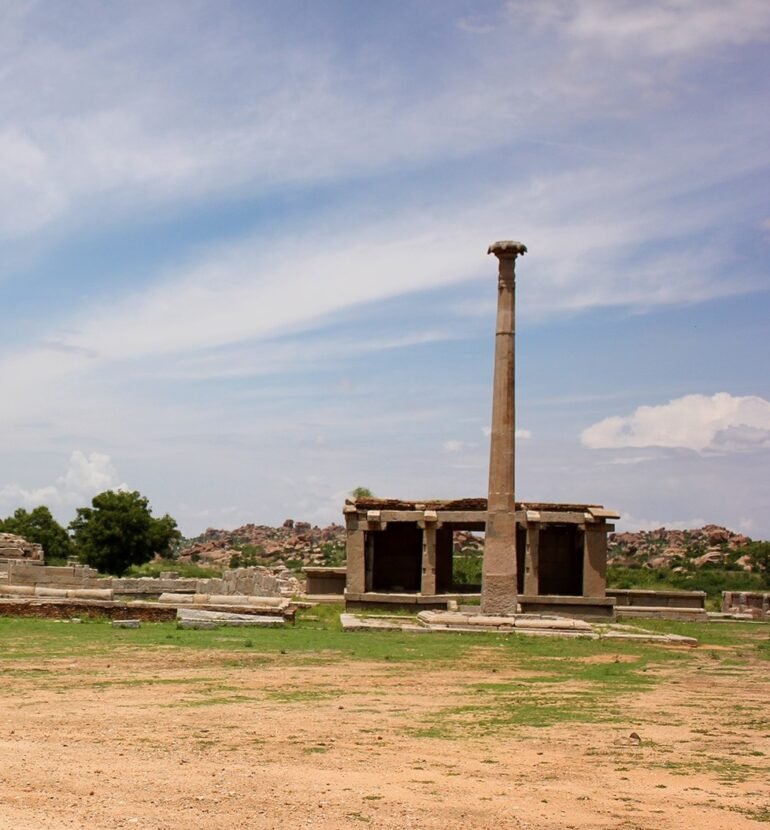 Pan Supari Bazaar, the ruined gateway and the monolithic lamp post opposite to Hazara Rama Temple complex, at Hampi, ruins of the glorious Vijayanagara, in Karnataka, India
Share

Pan Supari Bazaar is a ruined marketplace in Hampi which is located opposite the main entrance of the famous Hazara Rama Temple, which is the only temple which is situated inside the Royal Enclosure of Hampi.

Its said that during the time of the Vijayanagara Empire there were four prominent market places among which Pan Supari Bazaar was one of them. Today the marketplace is a remnant of its glorious past.

What Does “Pan Supari” Mean

The terms ‘Pan’ and ‘Supari’ refer to betel leaf and areca nut respectively and as a combined term, ‘Pan Supari’ which generally means a combination of betel leaf and a mixture of areca nut which include selected spices, sweeteners and a paste of lime stone powder and water.

The street of the marketplace was considered a royal street which led to the palace during the times of the Vijayanagar Empire. Unlike Hampi Bazaar, the exact alignment does not exist today but could be found in archaeological maps.

This place is believed to be an important market place during the Vijayanagar Era, Historians till date do not know when the marketplace had exactly started to function. The marketplace is said to be a significant trading point during the peak days of Hampi.

In an inscription by Devaraya II (1424-1426 A.D.), the name of the Pan Supari Bazaar was found. There are also many other references of the marketplace among the writings of many tourists who had visited Hampi during the ancient days.

This spot was a flourishing marketplace where many traders from different countries and nearby kingdoms used to gather to sell their wares as Vijayanagar Empire was a wealthy kingdom during the time.

The marketplace starts from the front of the Hazara Rama Temple which has a tall flag post near the area where the ancient marketplace was located. It has a gateway which is in ruined condition which leads to the Royal Enclosure.

The marketplace once had several pavilions, temples and water tanks on either side of the road passing through the market which dont exist today due to the impact of weather conditions and destruction caused by the invaders in Hampi.

The Pan Supari Bazaar is an evidence of Hampi’s presence in the trade and commerce scenario during the period of time when the Vijayanagara Empire flourished in the southern part of India. 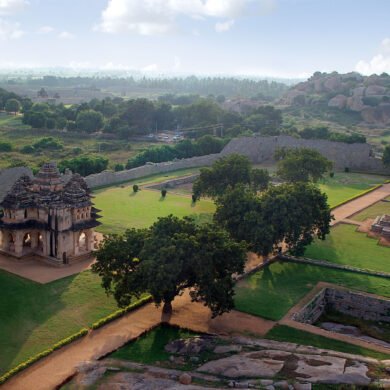