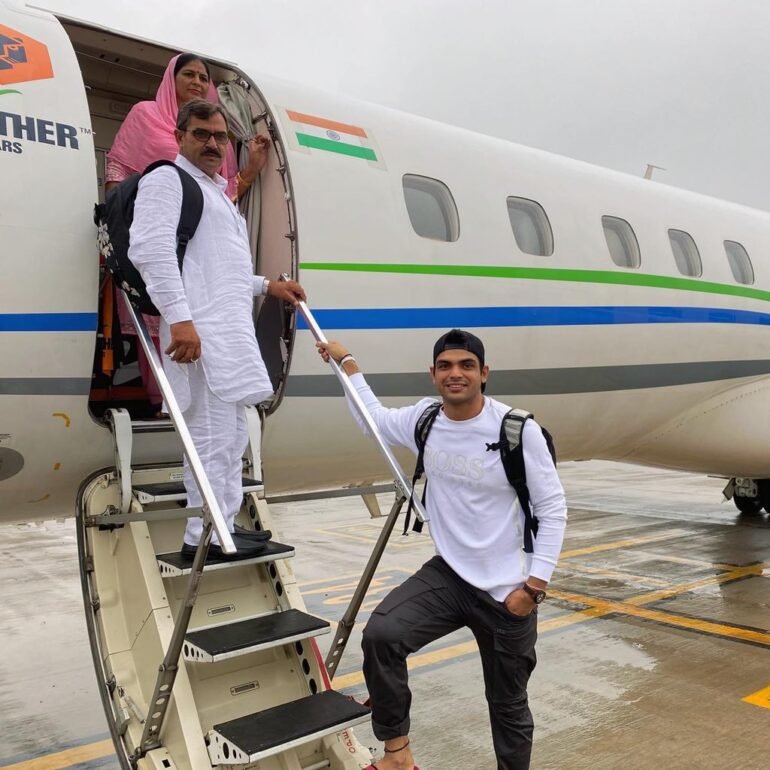 Tokyo Olympics gold medalist Neeraj Chopra on Saturday fulfilled one of his dreams as he took his parents – Satish Kumar and Saroj Devi – on their first flight from Delhi to Ballari for a JSW event. The javelin star comes from a very humble background and hails from Haryana’s Panipat.

Neeraj, along with his father Satish Chopra, mother Saroj Devi, his first coach Jaiveer Jaglan and others, boarded the chartered flight from Delhi to Bellary (Karnataka) to attend a programme organised by his promoter JSW Sports. The family landed back in Delhi in the evening.

Neeraj Chopra took to social media to pen down an emotional post along with a couple of pictures of himself with his parents in their first flight. “A small dream of mine came true today as I was able to take my parents on their first flight,” Chopra wrote on Twitter.

Neeraj was born into a farming family in the small village of Khandra. His father, Satish Kumar, is a farmer, while his mother, Saroj Devi, is a housewife. He was raised alongside two sisters. He lives in a joint family of 19 members.

As per his family members, Neeraj used to tell his parents about his visits to various countries and promise them that he will take them on a flight one day.

Neeraj Chopra is currently on a break after ending his 2021 season post the Tokyo Olympic gold-medal winning performance in August. Chopra has been on a busy schedule since his return to the country, leaving him exhausted. He also suffered a slight bout of fever.

Chopra made history on August 7 in Japan’s capital city when he threw the javelin a distance of 87.58m to win independent India’s first gold medal in athletics at the Olympics. Chopra became the second Indian after Abhinav Bindra to win an individual gold medal at the Games.live TV.

The Olympian shared the pictures on his Twitter handle at 10 am. By the evening, the post was liked by 1.74 lakh users and re-tweeted more than 20,000 times.