Man climbs on a coconut tree and refuses to get down until his wife returned to him. 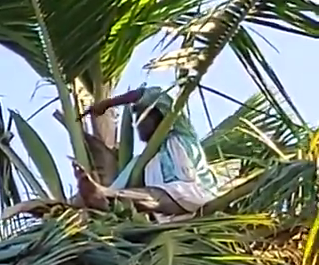 A 40-year-old man climbed a coconut tree and sat on top for about 8 hours in the village of Kudligi taluk in Dasobanahalli Gollarahatti, demanding that his wife be reunited with him. Villagers said that after frequent quarrels, the woman left him 5 years ago. Atop the tree, Doddappa sat and criticized the villagers for not resolving his family dispute. He said it had been difficult for him to take care of the house and 3 sons for all these years. He insisted that only if his wife came back would he come down.

At around 3pm on Tuesday, Doddappa climbed the tree and refused to come down, punishing villagers for failing to resolve the family dispute and bringing his wife home. It was difficult for him all these years, he said to take care of the house and three sons. For the next eight hours, the villagers and the sons of Doddappa stood below him, asking and coaxing him to give in. However, Doddappa insisted that only if his wife returned would he come down.

Villagers said Doddappa had married twice and it was his second wife who left him. His first married a cousin who went to her maternal home 20 years ago as she was not able to conceive. “His second wife left for her mother’s home in Shivapura Gollarahatti five years ago after repeated fights with him,” a villager said.

As their requests fell on deaf ears, villagers informed Kanahosahalli police in the evening. PSI H Nagaraj rushed to the spot by 8pm and assured Doddappa that his wife would be brought back. Police managed to bring Doddappa’s wife three hours later and convinced him to come down with the help of fire and emergency services personnel.

Nagaraj said the police did not receive any complaint. “We conducted a meeting late night in the presence of village elders and convinced both husband and wife to live together. Both have agreed to reconcile in the interest of their sons,” he said. 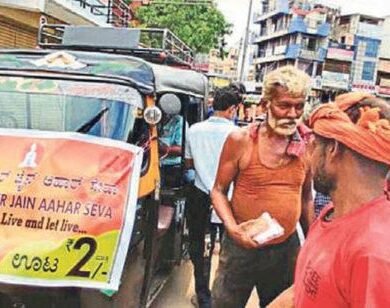