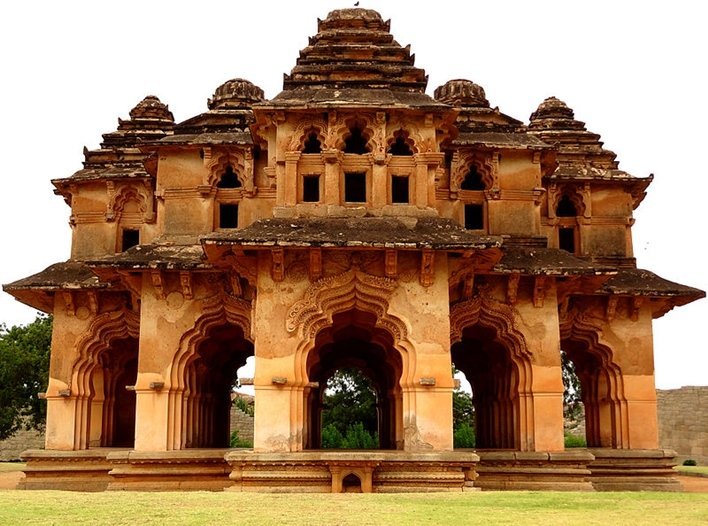 The Lotus Mahal, a glorious building which is the primary attraction for tourists or visitors located within the Zenana Enclosure, is a virtual air-conditioned residence built for one of the two wives of the Vijayanagara ruler Krishnadevaraya. It’s a segregated area that was also used by the royal women of the Vijayanagara Dynasty. The harmonious architectural combination of its features has made the Lotus Mahal distinctive at Hampi.

Actually, it is an appealing and long-awaited combination of two different styles of architecture during the Vijayanagara period. It is also called the Chitrangini Mahal and its remarkable design is the main highlight of the palace. It is some of the few beautiful structures in Hampi that had not been damaged or destroyed during the siege of the city.

History Of The Lotus Mahal

The Lotus Mahal was is a place where the Royal families of the Vijayanagara Empire resided. It was designed as a palace for royal ladies of those times to mingle around and enjoy recreational activities. It is said that the Queen of Krishna Deva Raya used to spend most of the time seeking pleasure and peace in this palace. The palace has also served as a meeting point for the king and his ministers and is also referred to as a council chamber in the maps found in the 18th century.

Kamal Mahal and Chitrangini Mahal are the other names by which it was known earlier. Several musical concerts and other recreational activities were held at this place. The surrounding area of the palace is covered with many shady trees which provide a cool ambiance to the palace.

The name has been given to the palace because of the shape it resembles. The balcony and the passages of the Lotus Mahal are covered with a dome that looks like an opened lotus bud. The central dome is also carved as a lotus bud. The curves of the palace are given an Islamic touch while the multi-layered roof design is moreover constructed in an Indo style of buildings. The style and designs of the structure have an inquisitive blend of Islamic and Indian way of architecture.

The Lotus Mahal is surrounded by a rectangular wall which has four towers. These towers are also in pyramidal shape giving a lotus-like structure visually. Also, around 24 pillars are present here to support the arched windows and balcony of the palace. The walls and pillars are carved beautifully with patterns of birds and sea creatures.

This is a two-storied structure with an open base floor, the sidewalls are having tall arched windows and the upper floors have balconies with arched windows. Hook-like structures are made on to the wall close to the windows to hang the curtain and the arches of the ground floor are recessed and ornate. The decorations and architecture of the structure are a curious mix of Hindu and Islamic styles. Lotus Mahal’s Islamic style arches and the Hindu style multiplayer roof and base structure are often quoted for the ingenuity of the Vijayanagara artisans.

When the Lotus Mahal is lit up during the evening, visitors witness a fantastic view. It is a standout venue in the entire Hampi to take photographs. Lotus Mahal should be a sure set destination on the list while visiting Hampi as It will stun you to perceive how best in class, Indian architecture and workers were ages back.

Hampi can turn extremely hot and to keep things cool and comfortable, The Lotus Mahal has a cooling system of its own, designed in a special way so that it had continuous water flowing through it. How cool right! 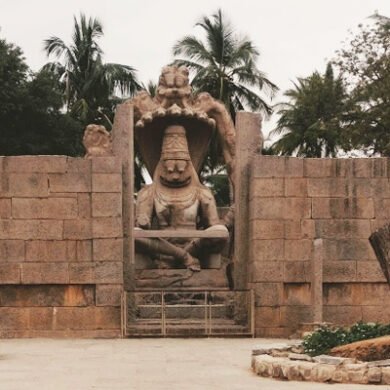