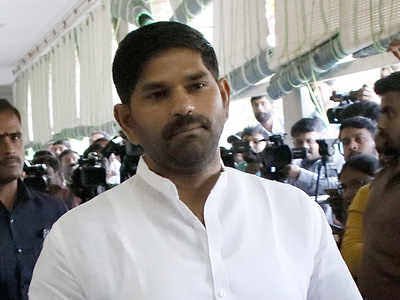 JN Ganesh has been on the run for a month, was arrested in Ahmedabad

Kampli MLA JN Ganesh, who has been on the run for almost a month, has finally been arrested by police officials on Wednesday. Ganesh, who absconded after he assaulted MLA Anand Singh at the Eagleton Resort, was arrested from a hotel in Ahmedabad, Gujarat where he was having lunch with his friends after visiting the Somanath temple.

Ramanagar police officials received a tip-of that Ganesh was in Gujarat. The three special teams of officers formed to looke for the MLA reached Ahmedabad on February 17 and they searched for the MLA for three days.
Along with Ganesh, two of his friends from the state and one more person will be brought to Bidadi late on Wednesday.

Ganesh is facing an attempt to murder charge for assaulting fellow Congress MLA Anand Singh during a drunken brawl at Eagleton Resort near Bidadi on January 20. His arrest comes exactly a month after he assaulted Singh.
Fearing poaching of its MLAs by BJP under Operation Lotus, the Congress had kept its MLAs at the resort. Ganesh and Singh too were part of the Operation Lotus along with another MLA Bhima Naik.

On January 20, there was an argument between the two. Ganesh abused Singh for leaking information of their whereabouts to the Congress leaders. He also said to have spoken ill of Singh’s brother-in-law.

Ganesh blamed Singh for spoiling the plans to join the BJP. He later pounced on Singh and assaulted him with flowerpots, wooden logs besides punching and stamping on his chest and onto his face. Singh sustained severe injuries leaving three of his ribs broken and his left eye turned black.

He had gone missing on January 23 after Congress let its MLAs go to their Constituencies.
A former rowdy sheeter, the MLA had recently applied for a bail. Singh in his complaint had said that Ganesh would have killed him if a few MLAs had not intervened. Ganesh is also said to have assaulted former minister Tanvir Ahmed.
The MLA will be produced before the local court in Ramangara soon after he is brought here, said the police.