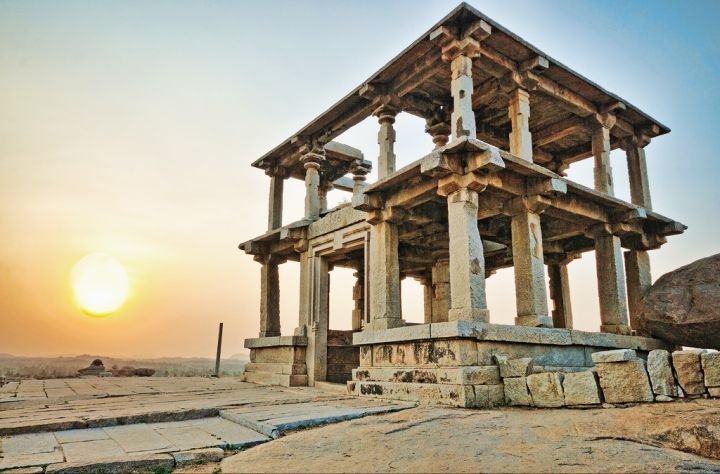 The Breathtaking view from Hemakuta Hill

Hemakuta Hill is almost an expanse of the rocky sheets with occasional ups and downs. This hill is believed to have had a number of temples, archways, and pavilions. The remains of this hill being fortified can still be noted across this hill.

One of the stupendous and astonishing top viewpoints of the then Vijayanagara empire. It isn’t as tedious to climb this hill when compared to the famous Matanga Hill and Malyavanta Raghunatha Hilltop. This viewpoint is towards the west of the historic Virupaksha Temple.

According to the Hindu mythology, Lord Shiva is believed to be undergoing an act of atonement or penance on the hills of Hemakuta, which is when ‘Kama’, the god of lust, distracts Lord Shiva from his penance and helps a local girl Pampa to marry Lord Shiva.

Due to the distraction, it managed to attract the wrath of Lord Shiva and eventually killed ‘Kama’ by fire that came out from his third eye. Later Rathi (goddess of passion and Kama’s wife) pleaded for the life of Kama. Siva brought him back to life but only in character not as a physical being.

Lord Shiva was impressed by the local girl Pampa’s dedication to marrying him and later consented to marry her. It rained gold on this hill. ‘Hema in the Sanskrit language means gold. The name of the hill thus connects with this legend’.

Hence a number of temples in this area are dedicated to Lord Siva. This place can be spotted with the largest number of pre-Vijayanagara temples. Atop is the Moola Virupaksha Temple with a pool in front, considered to be the original Virupaksha Temple.

How To Reach Hemakuta Hill?

The second access point to the Hemakuta Hill is through the twin storied archway located near the Sasivekalu Ganesha & Kadalekalu Ganesha shrines. The top locations near this archway is a great place to get an aerial view of the Krishna Temple campus just south of it; and the Lakshmi Narasimha & Badivilinga shrines located beyond the Krishna temple.