Hampi Saw A Huge Crowd Of Pilgrims On Monday 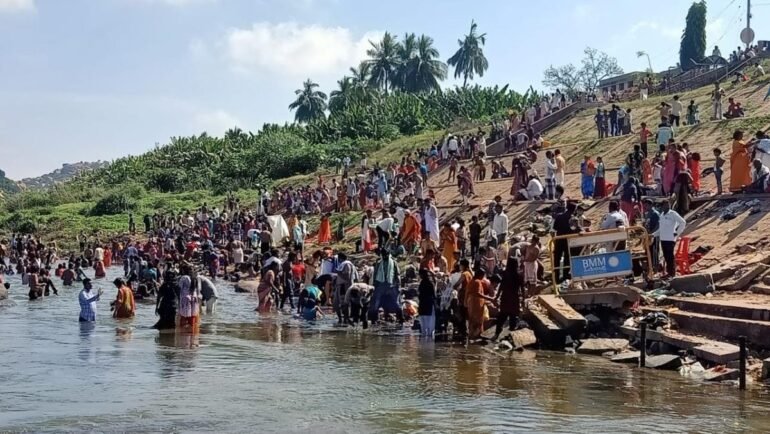 Forest Minister Anand Singh and Social Welfare Minister B. Sriramulu on Monday were spotted performing the Tunga Arati and the holy bath on the banks of Tungabhadra in Hampi in the light of the Full Moon. Both the ministers were seen wearing Madi clothes and worshipping the river Tungabhadra.

With the blessings of Goddess Pampambike and Lord Virupaksheshwara, with the determined will of C.M Yediyurappa, Vijayanagara has acquired a position of District, On behalf of all the people of the district, i convey heartfelt gratitude.

Pilgrims from various places flocked Hampi in the wake of Tungabhadra Pushkara and the Full moon that came together on Monday. A large number of devotees came from Ballari, Koppal, Raichur, Kadapa, Kurnool, Anantpur, Maharashtra’s Solapur, Pandarpur, and Kolhapur. Devotees went straight into the river to perform the Holy bath even when the temperature in the evening is mostly cold.

All age groups including women, children and senior citizens took bath in the holy water. Since Monday morning till evening, the bathing spots in the river were crowded. Later, after having a dip in the holy water, the pilgrims went straight to the Virupaksha temple to attain the Darshan.

Tungabhadra Pushkara has completely changed the atmosphere here in Hampi. With the ease in lockdown regulations, there was a rush of people into the crowded spots, monuments were opened for tourists and with reference to the recent Hampi utsav that was organized for a day witnessed minimal crowd.

After lockdown, the Famous Hampi seems to have returned to normalcy and has made local merchants happy. Other small traders including coconut, flower, Banana, Cold Drinks, Peanuts, Mirchi Bhaji merchants are making some money now. Auto Rickshaws is in high demand now after struggling for a few months now. Especially, as a tourist vehicle is forced to be parked away from the temple, the demand for auto-rickshaws grew.