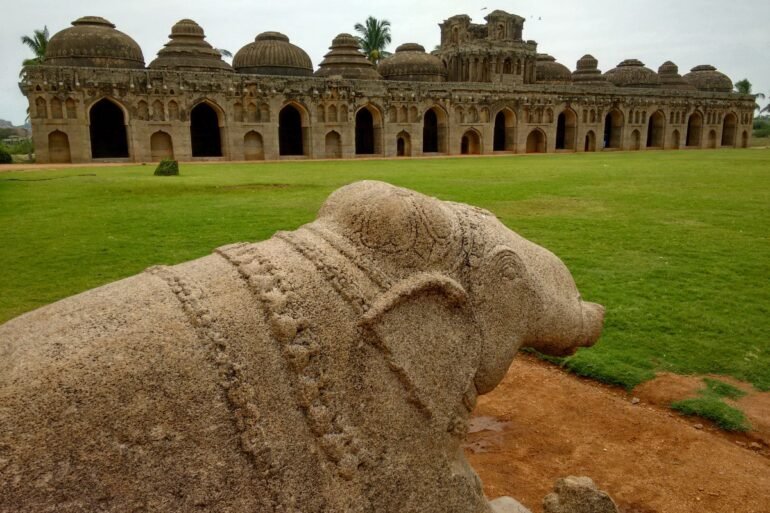 Elephant Stable is an impressive structure located outside the Zenana Enclosure in Hampi, that was used to provide shelter for the royal elephants of the Vijayanagara Empire. It is a wonderful example of Indo-Islamic architecture which was made from brick and mortar. It’s one of those few structures in Hampi that has not suffered extensive damage during the attack on Hampi which led to the downfall of the Vijayanagara Empire in 1565 A.D

The building is on the east side of the famous Lotus Mahal and it is of great height which is covered with domes of various shapes and a building near it to lodge the workers. There were guards standing outside the elephants stable to guard the elephants in the building. During the times of the Vijayanagara Empire, it had about 10,000 elephants of which only 10 of them were chosen for royal service and kept in the stables.

History Of The Elephants Stable

The Elephant Stable was constructed during the reign of the Vijayanagara Empire in the 15th century. It’s among the few least destroyed buildings in Hampi. However, it is still not known which king of the Vijayanagara Empire had built this stable here. The Army of Vijayanagara had several elephants but this building is meant to accommodate only eleven elephants. Some historians also say that King Deva Raya II was a great lover of elephants so it may be possible that these stables were built during his period. Also due to time and weather conditions, the building has weakened to an extent. However, even today it is still in a firm condition, more than 600 years after it was constructed.

Architecture Of The Elephants Stable

Though most of the structures and monuments in Hampi were built using the Vijayanagara style of architecture, a few structures display the Indo-Islamic style as well. The Elephants Stable is a long structure with a rectangular shape that has a row of eleven huge domed chambers which are interconnected with large arched openings. Each chamber is large enough to accommodate two elephants at a time. The building contains a concealed staircase that leads one to the rooftop of the building. The chambers of the building here have high ceilings.

The whole building looks symmetric with respect to its central hall. The dome in the center is the most decorated among the 11 domes of the building the five pairs of domes on either side resemble the Islamic style of architecture which are of alternating patterns and preserved carefully. There is a small manhole type opening at each chamber for the mahouts to enter in the elephant compartments. Metal hooks are present inside the roof which were used to tie the elephants which were also used as a pulley by the mahout to set the howdah on the back of the elephants. 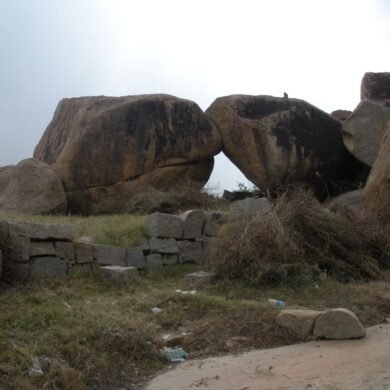