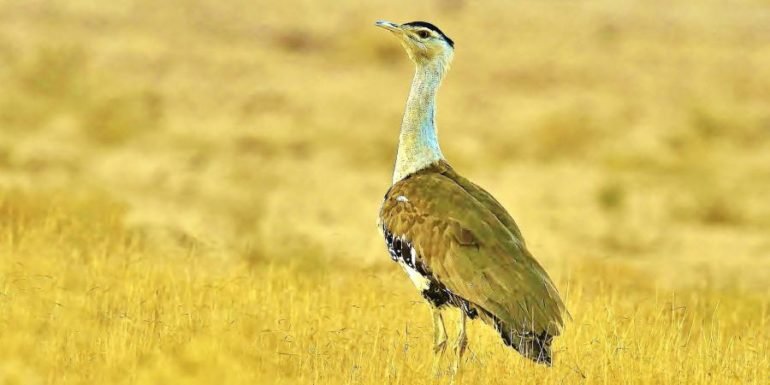 Great Indian Bustard, a critically endangered Indian endemic bird on the verge of extinction, is showing signs of recovery in Bellary district.

But, with the State forest department constructing watchtowers in Siruguppa taluk in Ballari, conservationists worry that it could impact the already thin population of these birds. The watchtowers are being constructed to keep a watch on the habitat and wildlife, and control poaching. The conservationists say that any construction here will only affect the threatened species.

“Cases of poaching and hunting have increased. Two months ago, people from Andhra Pradesh were found hunting a blackbuck, and hare and fox hunters were also found. Since the forest patch is surrounded by private and government lands, it was decided to construct watchtowers and station staffers round the clock,” .

Principal Chief Conservator of Forests Ajai Misra told that so far, little attention was being paid to poaching here. Watchtowers and anti-poaching camps in border areas and government lands will improve vigil as there is a need to control the situation. Officials said that since there are no camera traps installed, vigilance was becoming a problem, and the department is working on installing them too.

However, conservationists are not convinced and say that construction or commercial activities will only damage the natural habitat, and lead to problems. According to the latest report, there are around 12 Great Indian Bustards and the forest department is yet to start a survey with the Salim Ali Centre for Ornithology and Natural History, Coimbatore.

“The forest department is constructing five watchtowers on 300 acres, and one is ready. They are being constructed without consultation or discussion, and no one knows what they are for. We are worried about the remaining wildlife here.” The area houses a healthy population of blackbucks, foxes, jackals, wolves and hyenas. Small herbivores like hare are also found there.