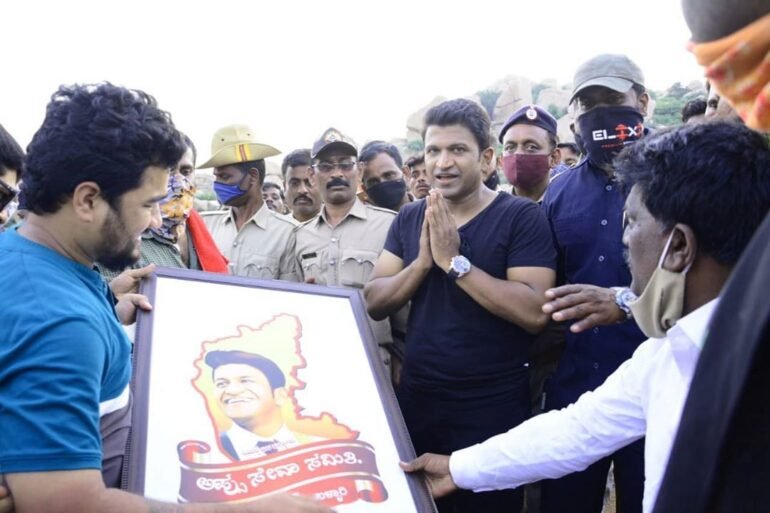 Power star Puneeth Rajkumar and his cast, have been shooting the next schedule of their upcoming movie ‘James’ in the cities of Hosapete and Gangavathi, mainly in Hampi. The team of ‘Appu Seva Samiti’ decided to inaugurate the logo of the same and in the presence of the star on whom it was all inspired. During the Official release of the committee logo, Young leader K.S Ashok Manju and J.P Rajesh Ravi were also present.

Puneeth was also spotted at Tungabhadra dam on Sunday (18th October 2020), while he was shooting in a close-by location.

The movie ‘James’ has already created a huge buzz in the Kannada film industry. “‘James’ is a complete entertainer movie with a different genre and the title of this movie will justify the story.

The film is being produced by Kishore Pathikonda under the banner Kishore Productions. The film started to roll from 19th January 2020 in Bengaluru. The Second Schedule of the film started on 14th October 2020 in Hampi

There are over 200 members of the film team including Puneeth Rajkumar and Priya Anand. Some scenes from the film were shot in Bangalore before the nationwide lockdown. The shooting was resumed after the lockdown in Hampi, Gangavathi, and Kamalapura.