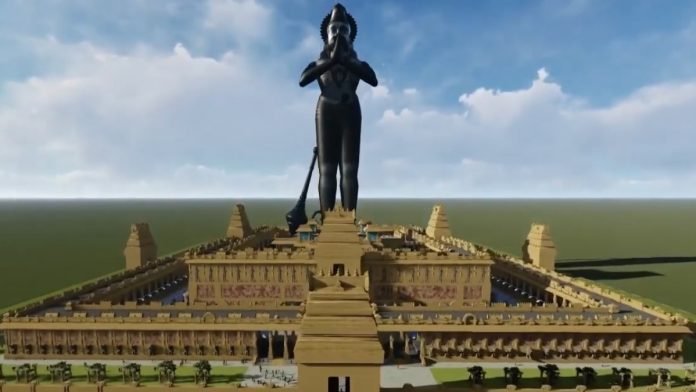 A private trust is planning to build a 215 meters height statue of Hanuman and the estimated cost to build the statue is around Rs 1,200 crore.
The statue is to be built in Kishkindha, the birthplace of Hanuman, over the next six years.

According to Karnataka government sources, the state will partly fund the project while the trust will gather the rest through donations, and build the statue. The trust is planning a Hanuman chariot yatra across the country to raise the funds.

A proposal for the project was shared with the government in February. It is the works currently, said the sources.

Karnataka Culture Minister C.T. Ravi said the government is considering the proposal and has sought a comprehensive report.

The trust has approached the Karnataka government to grant them 10 acres of land for this project.

Swamy said there are other challenges too before they begin building the statue. These include assessment of wind direction and environmental clearances as the location is close to the UN heritage site.

“Lord Rama’s statue will be 221 m tall. Hanuman, his ‘eternal’ devotee cannot be higher than his master, so the statue will be made 6 m shorter than that of Lord Ram,”

said Govindananda Saraswathi Swamy, the seer who heads the trust.