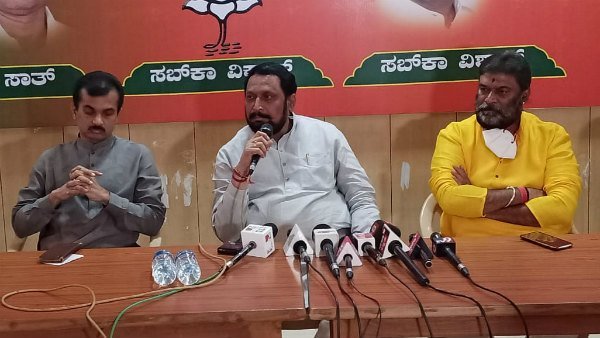 Minister for Forest and Ecology, Anand Singh and Deputy Chief Minister Lakshman Savadi arrived in Ballari on Sunday for BJP’s Gram Swaraj program. The fighters all of a sudden besieged the leaders who had come to the Durgaamma Devi Darshan were objected the entry and severe attacks were made on the ministers.

The militants allege that Anand Singh divided the district in favor of his personal interests. Still, police have tightened security measures as a precautionary move, arresting some of the fighters behind the siege.

The protesters alleged that the protests in Bellary had sparked protests over the division of Bellary and the formation of the Vijayanagar district. Protesters shouted slogans against Minister Anand Singh and expressed outrage that the district was responsible for the division.

Police have seized more than 20 leaders of the Karnataka Jana Sangh Organiztion from the protest that got fired on Sunday. The leaders of the Kampli taluk struggle committee held a meeting on Sunday regarding the observation of Bandh in Kampli taluk on Monday, as they showed discontent over the Bifurcation of the Ballari district, formation of Vijayanagara District, and keeping Kampli out of the new district.

The leaders of the committee said “Attempts to keep the Gateway to Vijayangara empire ‘Kampli’ out of the Vijayanagara district is not acceptable, the decision needs to be withdrawn”. The meeting was chaired by Aravi Basavanagowda, K.M Hemmayyaswamy, and many other leaders.

The bifurcation of the district was only for Administrative purposes and not Political. Any objection can be placed infront of the legislation and everybody is free to do so.