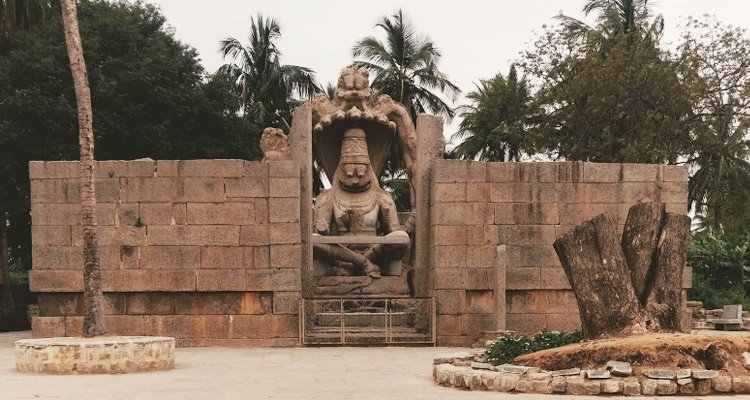 Why Is Ugra Narasimha Famous?

Ugra Narasimha is the largest statue in Hampi. Narasimha, according to Hindu mythology is referred to as Lord Vishnu and his wife being Goddess Lakshmi, who is often known as the Goddess of wealth.

Narasimha means a creature who is half a human and half a lion, where ‘Nara’, means a human, and ‘Simha’ means lion, who is sitting on the coil of a giant seven-headed snake called Sesha. The heads of the snake act as the hood above his head. The god sits in a cross-legged Yoga position with a belt supporting the knees.

Sometimes this is referred to as Lakshmi Narasimha (i.e. Narasimha in its ferocious form). The protruding eyes and the facial expression are the basis for this name.
Narasimha is one of the ten incarnations (avatar) of Lord Vishnu.

The original statue contained the statue of goddess Lakshmi, consort of the god Vishnu, Intricately placed on his lap. But this statue has been desecrated during the raid of Deccan sultanates leading to the fall of Vijayanagara.

The statue of Goddess Lakshmi which is in ruins can now be seen in Kamalapura Museum. . But the goddess’s hand is visible resting on his back in an embracing posture. If you get a chance to go inside this enclosure, it is possible to see the hand of the goddess. Even the nails & the rings on her fingers are so perfectly engraved.

Lion’s face of Lakshmi Narasimha also sometimes called Ugra Narasimha (the ferocious Narasimha) somehow is a single statue that can alone demonstrate the time when sculptors used to be so creative and also how destructive the human mind can be.

Hindu mythology has a tale of Narasimha’s origin.

The story of Narasimha is found in a range of Puranas such as the ‘Matsya Purana’, ‘Padma Purana’, and ‘Harivamsa’. The story talks about a demon king named as ‘Hiranyakasipu’ who performs various rituals and does tapas or penance for around 11,000 years and asked for a boon/wish from Lord Brahma.

He asks for almost immortality. By asking that neither a human nor an animal should be the reason for his death, neither by any weapon nor during day/night. This made him generate Pride which made him he was invincible and inevitable. It is said that he then went on a rampage to harass the gods.

Historically, the roots of Narasimha can be traced to lion worship in ancient India. It was during the Gupta Dynasty that Narasimha worship gained widespread popularity. Even the name of one of the Guptas emperors was ‘Narasimhagupta’. There are more than 350 Narasimha temples in Andhra Pradesh alone.

You can reach this spot on the main road. The shrine is located at the midway of the main road that connects the Sacred Center to the Royal Center. The statue is massive and awe-inspiring and is right next to the Badava Linga, a shiv linga immersed in water throughout the year. This is possible through some aqueduct that brings in water from the river.

About 200 meters south of the Krishna Temple (take the road that runs through the arch) you can spot a small canal crossing the road. An unpaved path at the right side (towards west) leads you to the Narasimha statue and the Badavilinga Temple next to it.

It is open for the visitors from 6AM to 6PM.