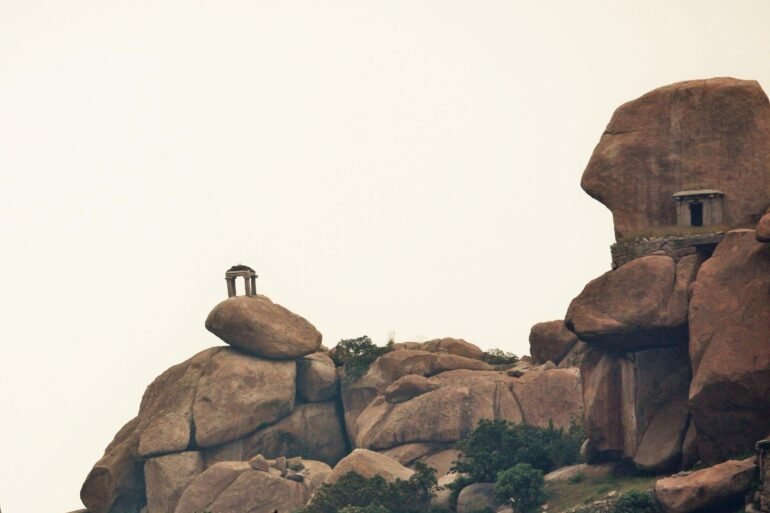 The Tenali Rama Pavilion is located near the Zenana Enclosure of Hampi. It is an elevated area that stands close to the Royal Centre of the Vijayanagara Empire. It is one of the many structures in the ruined city that attract tourists to this date.

The pavilion still reminds people about Tenali Ramakrishna, the witty and impressive court-poet of King Krishnadevaraya of the Vijayanagara Empire.

The Tenali Rama Pavilion is an elevated area which is located near the Zenana Enclosure Of Hampi. It’s one of the main structures in Hampi which attracts tourists to date.

Many people visit here to experience the significance of this pavilion and imagine the great poet of King Krishnadevaraya of the Vijayanagara Empire.

The name Tenali Rama refers to the legendary personality of South India, Tenali Ramakrishna. He being a renowned poet was a great scholar as well. He mastered many languages like Telugu, Marathi, Tamil, and Kannada.

He was called ‘Vikata Kavi’ and was one of the Ashtadiggajas (Eight Wise Men) of the court of King Krishnadeva Raya. Many say that the King was fond of Tenali Rama who was also the court jester.

Historians say that Tenali Rama had a solution to every problem that befell the kingdom from the mundane to the bizarre. Its further said that the King was fond of his humor which endeared him to the King.

The King had decided to build the Tenali Rama Pavilion to show his fondness for the court and to let everyone know about his talent. However, some myths and stories about this pavilion are said to be unrevealed to date.

It’s a small stone structure that is constructed in the Vijayanagara style of architecture. It’s a pillared hall which is situated on a rocky area. A wide view of the marketplace that flourished in the area near the pavilion could be seen from the top.

It’s an exceptional structure in terms of architecture as it’s a simple hall on an elevated area that overlooks the street. It’s significant for tourists as it reminds people about the tales of the legendary Tenali Rama.

The pavilion is considered an important structure as it’s named after one of the famous personalities of King Krishnadevarays Court.