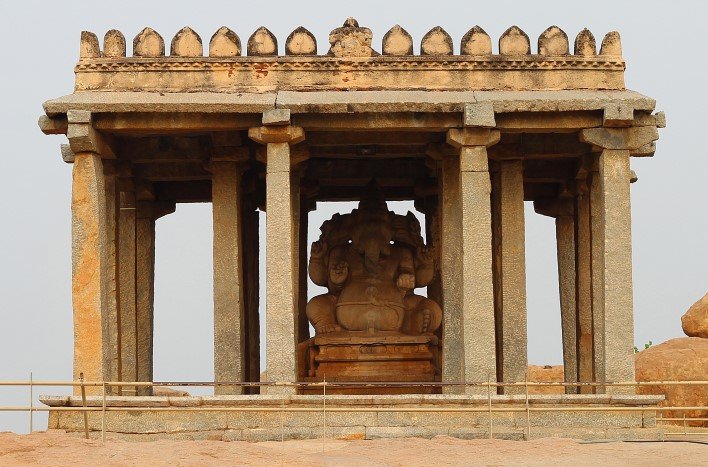 Sasivekalu Ganesha Temple is one of the most magnificent temples in Hampi, it has been recognized by UNESCO as a world heritage site. It’s basically a huge statue of Lord Ganesha which is carved out of a single block of rock. The temple is dedicated to Lord Ganesha and is located on the southern side of Hemakuta Hills and it is said by the locals here that the temple resembles a mustard seed or the belly of Lord Ganesha.

Sasivekalu Ganesha temple was built in 1500 AD and its name Sasivekalu in the Kannada language means mustard seed. The temple is one of the oldest structures in Hampi which is located on the Hemakuta hills, The mandapa here is according to the square principle of the Hindu temples. There is an inscription on the sculpture which is as old as 1500 AD and Historians say that this was erected in memory of King Narasimha II, of the Vijayanagar Empire. This temple and the statue is indeed one of the finest specimens of Indian sculptures.

The sculpture of Lord Ganesha here is seen in a half-lotus position with four arms. The sculpture holds a goad and a broken tusk in the left and right hands. It is covered with a rough wall covering pillars around it. The rear side of the sculpture has the image of Parvati who is the mother of Lord Ganesha. It is crafted in such a way that its displayed like Ganesha is sitting in his mother’s lap. When one observes the sculpture properly one can see that Sri Ganesha is wearing a sacred thread which is also known as Yagnopa veetha , which is mostly worn by men.