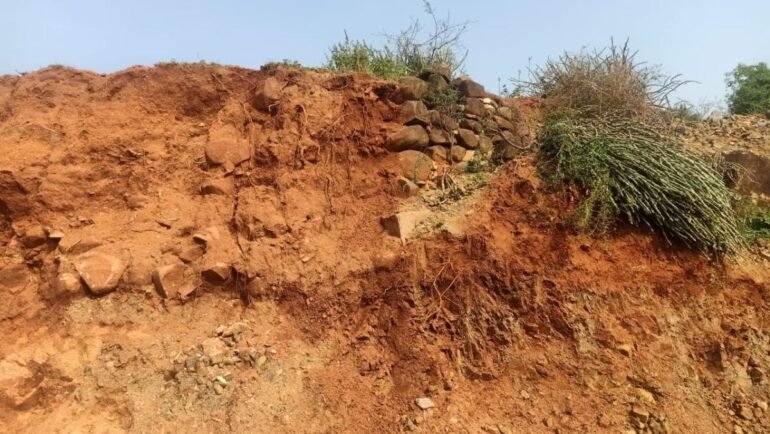 Bellary Thermal Power Plant’s installation work is being carried out through Kamalapura, Nallapur, and Chinnapur, currently, the monument near the work has been a topic of worry as the ground is being dug as part of work near the fortress near Nallapur. The villagers are worried that the work could affect Gouramma lake too.

According to Historians, Achyutapura, a village near Nallapur was built during the reign of King Achutadevaraya of the Vijayanagara Empire. A Fort wall was built around the kingdom for the sake of the protection of villagers. Now there is work going on near the same fortress and it is demanded by the villagers to stop the work.

There are many monuments and ruins of the Vijayanagara period around Kamalapura and Nallapura. One of these two is the fort wall. JCB has dug for the pipeline installation. The pipeline is being dug up to a depth of 10 to 12 feet. the pipeline works alongside this route, the fort wall needs to be broken. there are also some intermediaries who are guiding people inside the fort by cheating and charging them money.

The Archaeological Survey of India should stop the work immediately, wished Vishwanath Malagi, the president of Vijayanagara Memorial Culture and Conservation Army.

It’s not right for the government subsidiary to undertake non-scientific work. Just marking and digging into the pipeline won’t be enough. there are monuments and temples on the way. Now the work needs to be stopped and pipeline should be put through another route

“if one looks at the ongoing work at Kamalapura and Nallapura, it is possible to pass through Gauramma lake in your route, the pipeline installation process will definitely ruin the existence of the lake,” says, local farmers