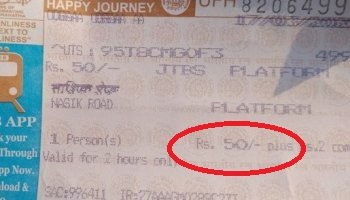 The South Western Railway on Tuesday increased the price of platform tickets by 400% saying that it will decongest crowded railway platforms. The ticket price has been raised from ₹10 to ₹50.

In a press release, SWR said ticket price has been increased temporarily and will be applicable from March 18 to March 31.

Divisional Railway Manager Ashok Kumar Verma said, “Every day 2.5 lakh passengers use major railway stations in the city. We felt there is a need to restrict the entry of visitors at the platforms to decongest the platforms. This will also help in containing the spread of the COVID-19.”

However, a few passengers slammed the move saying railways is making Covid-19 as an excuse to generate revenue.