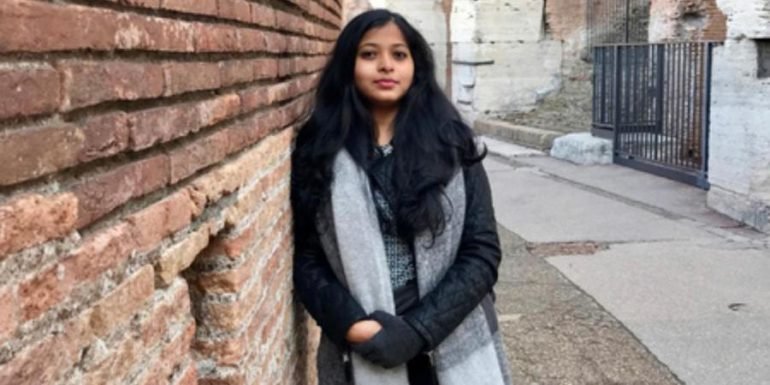 Nandita Baabu, an architecture student shows Hampi’s heritage sites in a new light using popular characters and scenes. For over a month, Nandita has been sharing the digital artworks on her social media page along with relevant anecdotes, garnering attention.

Move the slider left or right to see changes

“Every composition is a half-and-half of fiction and facts. Simply put, it’s like the film Titanic wherein the story about the sinking ship is a fact and the other narratives around it are fiction,” says the artist, who has primarily dabbled in photomontage and photo-manipulation techniques to develop her artworks.

Although Nandita started working on the series only during the lockdown, the journey — of understanding the history and heritage of Hampi, its various monuments and the lores attached to it — started way back in 2018.

“My love for heritage conservation and the experimental streak was born in 2018, when I joined as an architecture intern at Edifice, under the tutelage of its founder and chief architect Pramod Balakrishnan. He was my first design mentor. Until then, architecture worked like a formula — follow deadlines, work on assignments and submissions, and move on to the next project. But Pramod Sir taught us how to approach creativity,” she says.

During the internship, a group of nine interns embarked on a trip to Hampi as part of an on-field assignment. “It was our first time to Hampi and it was like nothing we had ever seen before. A stepwell from Gujarat; a Dravidian style temple gopuram at Virupaksha temple; an Incan ziggurat-like platform which is known as the Mahanavami Dibba; watchtowers and free-standing mandapas, and Islamic style-influenced pavilions with foliated arches — the myriad complexes were surreal. However, the part I found most interesting was the overall configuration of the planning of the city which had served as the Vijayanagara empire’s capital,” she says, detailing the metaphysical aesthetics that was achieved in the city.

“The city was not built in the regular grid as it is usually done in this part of the world, but built in response to the context and principles of Archaeoastronomy, wherein the architecture is aligned with stars and planetary bodies,” she explains.

She fondly recalls one of the group’s guides sharing an anecdote about the mandapas that were often used by the royal women to engage in dancing. “They would be lit with oil lamps during the nights and the finest of muslin clothes used to cover the entrances. This way, those outside could only see their silhouettes. It was enchanting. We are used to watching stories about magical kingdoms in Disney movies. To experience something similar in our own country felt amazing,” she enthuses.

Days after the trip, the enchantment lingered and soon Nandita took up Hampi as the topic for her 10th-semester thesis. “Though the group of monuments come under the UNESCO World Heritage, it doesn’t really have a modern museum or an interpretation centre to help people learn its history. My thesis was to propose a Hampi Interpretation Centre. So I explored more into its history, myths, art and architecture,” she shares.

When Nandita started work on her thesis in November 2019, little did she know that she would hit a roadblock. “There was a lot of research information but everything couldn’t be translated into design. So out of curiosity, I decided to turn my research into something tangible through art as a mode of personal expression,” she says.

Mesmerised by the sunsets and sunrises, the legends that lay hidden between the crannies of the ruins and the structures that were once part of Vijayanagara’s vast empire, Nandita says that she took it upon herself to create something “original”.

“When I read the stories of how these ruins were formerly used, I had to envision what the ruins looked like back in the day. In the process, I started interpreting my thoughts and fantasies into digital art and design and that’s how I ended up with the series,” she shares.

For over a month, Nandita has been sharing the digital artworks on her social media page along with relevant anecdotes, garnering attention. “I have had my fair share of creative slumps during the quarantine. But I usually watch a good movie or read a good book that helps me tide through it and get back to work. After coming across my works, photographer Amar Ramesh of StudioA reached out to me for a possible collaboration to document the temples of Tamil Nadu through digital art. Though nothing is finalised, a lot of opportunities have come my way because of this series and I am grateful for it,” she says.

Nandita is currently taking a break from the Hampi series and has shifted her focus on narrating more local stories through her artworks. “This process has helped me rethink my career path…I am getting drawn towards heritage conservation and illustrations. So, that’s something to ponder upon,” she shares.