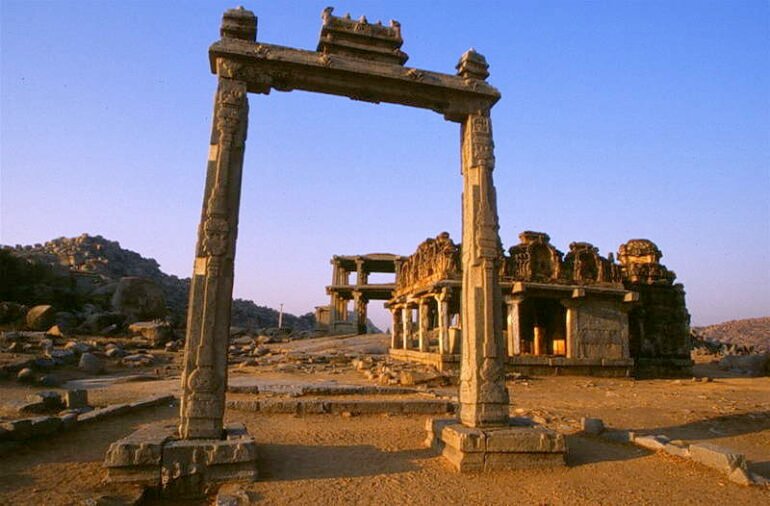 Kings Balance also called Tula Bhara or Tula Purushadana is one of the rarest monuments still intact in the city of ruins – Hampi, which is located near the southwest of the Vittala Temple. It is a structure on which king Krishnadevaraya used to weigh himself self on one side and with precious stones, gems, gold on the other side, and then distribute it to the priests of the temples in charity.

Its said that this act by the King was done on special ceremonies like lunar or solar eclipses and Dussera or other occasions. The structure which is five meters tall stands like an archway which is carved beautifully with stone. Having a significant ancient history and architecture this structure attracts most of the visitors in Hampi.

History Of The Kings Balance

The Kings Balance has a fascinating history associated with it, In the 15th century, the structure was used by the Royal King of the Vijayanagara Empire on special occasions like Dussera, New Year, etc. The King used to weigh himself with jewelry, gems, gold silver and give it away to the priests of the temples in charity

The Royal kitchen was used whenever such occasions approached and the king’s favorite dishes were prepared at the insistence of the city council. The king was not allowed to move much and was provided with fatty foods on such occasions so as to let him gain few extra kilos, So when the Kings balance was used there would be extra weight of the king on the scale resulting in distributing some extra wealth to the priests. At times the structure was also used at times to weigh pulses and grains and other commodities.

Architecture Of The Kings Balance

The Kings Balance in Hampi is a massive frame beautifully carved in stone. The structure consists of two carved granite pillars with the height of 15 feet each. These pillars support heavy stone beam of 12 feet approximately. One of the pillars at the location have the image of the two queens and the king chiseled into the stone.

Also, three hoops are present on the underside of the stone beam. It’s said these hoops were used to hang the balance during the king’s rule. This structure stands still as it was during the 15th century without any damage. Although there is no trace of the balance which was used in the ancient time, the structure remains as an amazing example of the days of the Vijayanagara Empire

More Images Of The Kings Balance 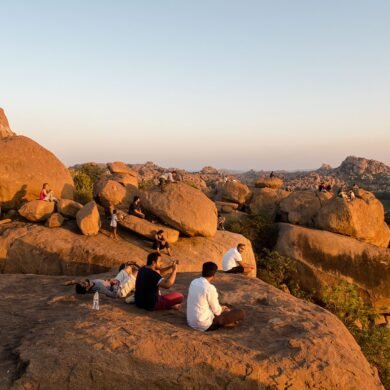 Hippie Island – The Incredible Land Of Adventure In Hampi