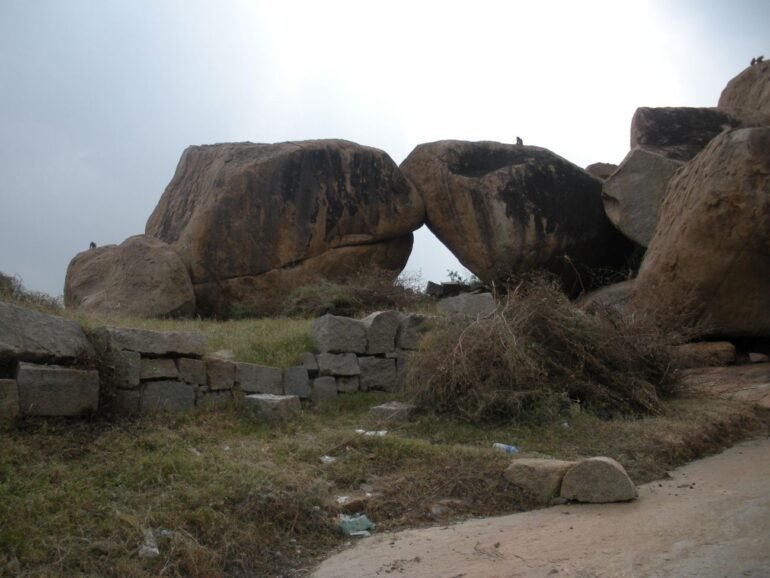 Akka Tangi Gudda or Akka Thangi Gudda is a formation of two huge boulders. ‘Akka’ means elder sister and ‘Tangi’ means younger sister, ‘Gudda’ means mountain in ‘Kannada’ language. It is located at Kaddirampura, just near the main road that leads from Hampi to Kamalapura. It is a natural arrangement of rocks that have been standing at this site from ancient ages. It IS as a famous spot to visit and the tourists can actually walk through the gap between the two giant rocks.

This is famous for the ancient folklore and a story which clearly describes in it, the wealth and prosperity that the Vijayanagara Empire had during its zenith, before turning into an empire of oblivion.

These are two giant boulders leaning against each other, making an archway like formation. You can find them on the left side of the main road when you go from the Underground Shiva Temple towards the ancient city or the Hampi village square. The road almost passes through under the stones.

As it is believed that in Hampi, Every story has a story to tell and has witnessed the entire past. There are one or more myths or stories of these two stones which are called as Akka Tangi Gudda, is said that, once when the Vijayanagara empire was at its zenith, two sisters had come to visit the beauty from another place and were jealous of the beauty it hid in and regarding the prosper, the city had engraved in itself.

As they got jealous, they started to ridicule about the great empire and started to talk badly about it. Soon after this, the reigning deity learnt about the sisters ridiculing the huge empire, the deity was furious and enraged and in the anger, the goddess cursed the two of the sisters to turn into stones and remain in Hampi forever.

Since then, it is believed that the two sisters have been standing there on the way to the ancient town of Hampi.

Another story about this spot of site-seeing says that the two sisters had come to sell their goods as this was believed to be one of those famous bazaars, called Hampi Bazaar where people from different regions came to trade. So, these two sisters are believed to have come here in search of good value for their items that had to be sold, but nobody really bought anything from them, which became the prime reason for them to feel despondent and was enough for them to talk badly about the empire. The curse part however remains the same in all forms of folklore.

The twin boulders have been enduring the trials of rough weather since the ancient times. Yet they have always stood there like strong sentinels.

However, in the recent past, one of the gigantic rocks of Akka Tangi Gudda developed a crack and partly got destructed. The middle portion of the affected boulder could not sustain for long and finally gave way. After withstanding the ravages of time for such a long period, the boulder split into two by a natural process.

It is being said that the crack occurred as a response to several factors. The extreme weather conditions of scorching summers and dipping winters and the vibrations resulting from heavy vehicular traffic on the adjacent road are considered to be the main causes of the cracks that got developed.

The sinking of the soil on which the rocks have been standing for such a long time has also contributed to the widening of the crack and the splitting of the rock.

Akka Tangi Gudda has been a famous tourist destinations as it provides shelter and shade from the scorching sun and rains. Photography is allowed here for the tourists. 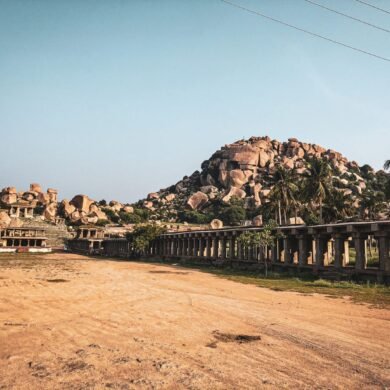