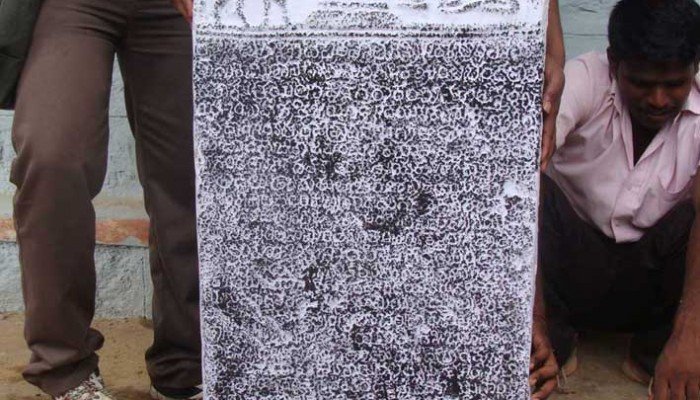 An inscription that dates back to 1394 AD, was found near the Kailkere area in Japthi village in Kundapur taluk on July 27. An enthusiast in the field of history and archaeology, Rajeshwara Upadhyaya Kancharthi sighted this inscription that is said to have been written during the time of Harihara II (1342-1404 CE) who was an emperor of the Vijayanagara Empire from the Sangama Dynasty.

A research student in the field of history and archaeology, Shruthesh Acharya Moodubelle took the e-stamping of the inscription and read the content that is written in Kannada script.

The inscription has both Kannada and Sanskrit languages. Giving details, Shruthesh Acharya told that the six-foot-long and 2.5 feet wide inscription on a granite stone has 54 lines and the shloka on it begin as ‘Sri Ganadhipathaye Namaha’.

Locals Vinay Kotari and Roshan Kotary assisted Shruthesh Acharya in studying the inscription on the site. He said an in-depth study should be conducted to throw light on the historical aspects of the region.

The details written on this inscription state that Mallapa, a governor appointed by Harihara II to rule this part of the region around Barkur offered gold coins and other land properties to three scholars — Narayana Vajapeyayaji, Narahari Somayaji and Pandari Deekshitha — for praying in favour of the good health of their king Harihara II before the holy seat of Lord Sri Virupaksha at Hampi.

The Sangama dynasty was a dynasty of the Vijayanagara Empire founded in the 14th century by two brothers: Harihara I (also called Vira Harihara or Hakka Raya) and Bukka Raya I. They were the sons of Bhavana Sangama. Bukka’s successor, Harihara II, continued Bukka’s campaign through southern India and managed to take control of coastal Andhra between Nellore and Kalinga and conquer the Addanki and Srisailam areas as well as most of the territory between the peninsula to the south of the Krishna River.