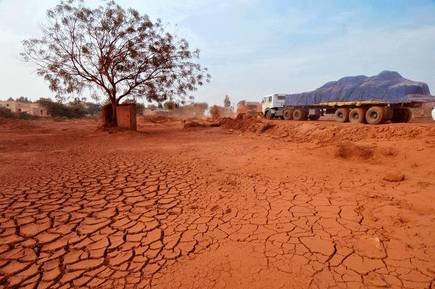 A year after mining was banned, a study in 2012 in Sandur and Ballari revealed that mining activities there led to the removal of all vegetation and thereby fauna; topography and land scenarios have changed owing to the digging of open-pits and dumping of overburden rock mass affecting the surrounding areas. The study also shows that dust deposited on the crop results in poor growth.

Sanna Mareppa, a Hosapete-based (in Ballari) social worker, explained that before he leased his land for mining in 2007, he used to grow maize and paddy in the fields. But after his land was returned to him he discovered that it had lost its ability to grow crops. He said that mining companies didn’t even level the dug-up land before handing it back.

Chandrashekar Meti of AIUTUC stressed that the mining companies are obligated to rehabilitate and restore the land after mining, but no company works towards restoring the land. He said that if a company is mining and cutting trees in a particular place, the company has to plant the same number of saplings in another place, but most of the companies have refused to plant and maintain saplings.

Even though the area receives good rainfall, farmers don’t get their expected yield because the dust accumulated on crops results in stunted plant growth and decreased productivity, Meti said.

Rudra Gowda, a farmer from Shro Basapura village in Sandur, said that this year, in September 2020 the maize production was satisfactory, but he has recently sowed chilli and onion now and worries that the dust pollution from November to February would affect the yield. “The dust situation is so bad that when we go to extract honey from the honeycomb, dust is present in it. The major pollution is from a private factory nearby since it is not only involved mining but also produces steel, cement and other products,” he added.