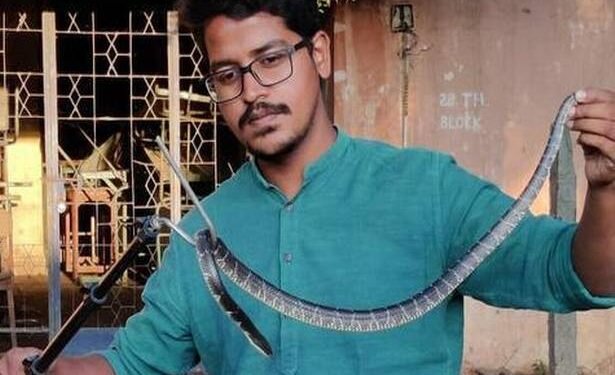 Ashok B.N., a final year MBBS student, who has passionately been rescuing snakes for years now, reached VIMS stadium about 8.30 p.m. after he got a call from someone who spotted the snake. Within a couple of minutes of close observation, Mr. Ashok concluded that it was krait. But, he was unsure whether it was a common krait or Sindh krait.

However, by further observation of its scales, bands, and other features, he concluded that it was Sindh krait that was not normally found in South India. He successfully rescued it and later released it at a safe and distant place.

Sindh krait bite causes fatalities and severe envenomation. The present polyvalent anti-venom may not be beneficial in treating the patients bitten by it. There is not much literature about this snake or snake bite.

He also claimed that the Sind krait is highly venomous and the present anti-venom doesn’t work for its venom. Describing the features, Mr. Ashok said that the Sindh krait looks like a common krait except for a few morphological features.

Sindh krait has single white bands and is divided on its lateral part of the body as compared to two divided bands on the common krait. Its lower lip and body are yellowish. Mid-body scale count of Sind krait is 17 scales as compared to 15 in common krait

Whenever Ashok rescues a snake upon request, he makes the people gather around him and inculcate awareness about the snakes and tries to break the myths surrounding them before leaving the place for releasing the snakes.

I receive around 10-15 calls a week these days. Within minutes after receiving a call, I reach the spot on my bike and rescue the snake in conflict with humans. I have rescued over 700 snakes in the last four years

Ashok never charged money for the service. If the people themselves come forward to give money, he accepts only a small amount that he spent on fuel for his bike.