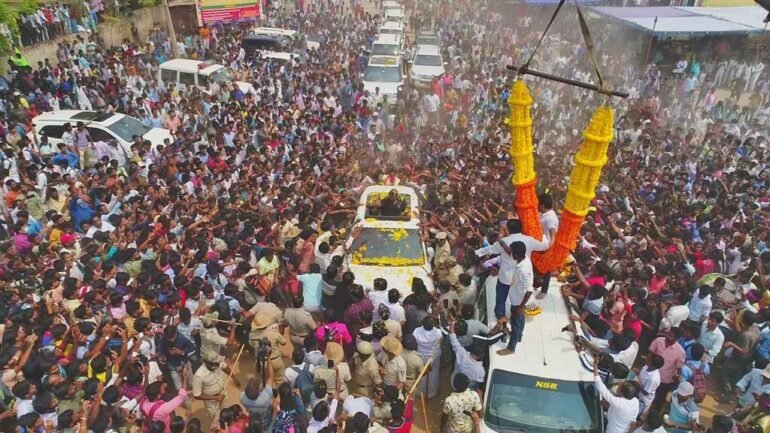 Thousands of people welcomed Puneeth Rajkumar on his visit to Ballari for his upcoming movie Yuvarathnaa. He was seen taking selfies with the crowd and thanking the crowd for the grand welcome.

Yuvarathnaa is an upcoming action drama film. The movie is written and directed by Santhosh Ananddram and stars Puneeth Rajkumar, Sayyeshaa, Sonu Gowda, Dhananjay, and Prakash Raj in pivotal roles. The film is produced by Vijay Kiragandur under the banner Hombale Films. The movie was shot simultaneously in Kannada and Telugu languages and is scheduled to release on April 1, 2021.

The 2-minute promo showcases Puneeth Rajkumar in two avatars, as a college student and police officer. The plot of the film revolves around a government-aided medical college that is on the verge of completing its golden jubilee. However, due to bizarre events related to drugs, the college shuts down indefinitely. To solve the issues, the protagonist swings into action and deals with the negative forces who are trying to destroy the university.