As many as 20 Black Buck furs were seized from poachers in two villages of Koppal when poachers were attempting to sell skins. Six persons were taken into custody while three vehicles were seized. A Black Buck fawn was rescued from the poachers.

Disclosing details of the seizures made by them, Koppal Deputy Conservator of Forests Harsha Bhanu said that poachers had stocked the skin of the Black Bucks at two villages in the district and raids were conducted at Hunasinhal in Yelburga and another at Itagi village.

The DCF said that these poachers had been stocking the skin for some years. He added that the inter-state trade or any foreign trade of the animal skin had not been established as yet.

Among the poached animals, he suspected that some may have been poached for meat consumption and others for their parts. The poaching was taking place through laying snares. Snares and weapons used by these poachers were seized by forest officials in the raids. However, the names of the accused were not available.

Keeping parts of a wild animal is a matter of pride in Saudi Arabia while in other countries, animal parts are treated as the auspicious item.

The arrested were searching for customers to purchase the pelts and were intended to ask Rs 50,000 per pelt. The arrested did not have any permit to transport or sell the antlers, pelt or calf. They had hunted the blackbucks and had sold the meat and were in the process of selling pelts and antlers, said sub-inspector of forest mobile squad Purushotham. 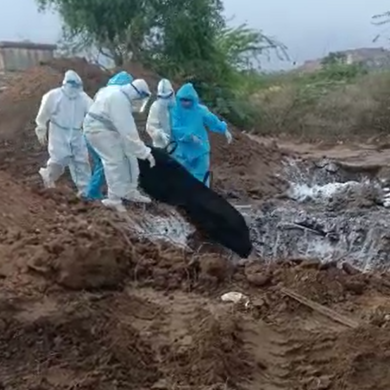