Karnataka puts pressure on AP to build an additional reservoir across the Tungabhadra River. 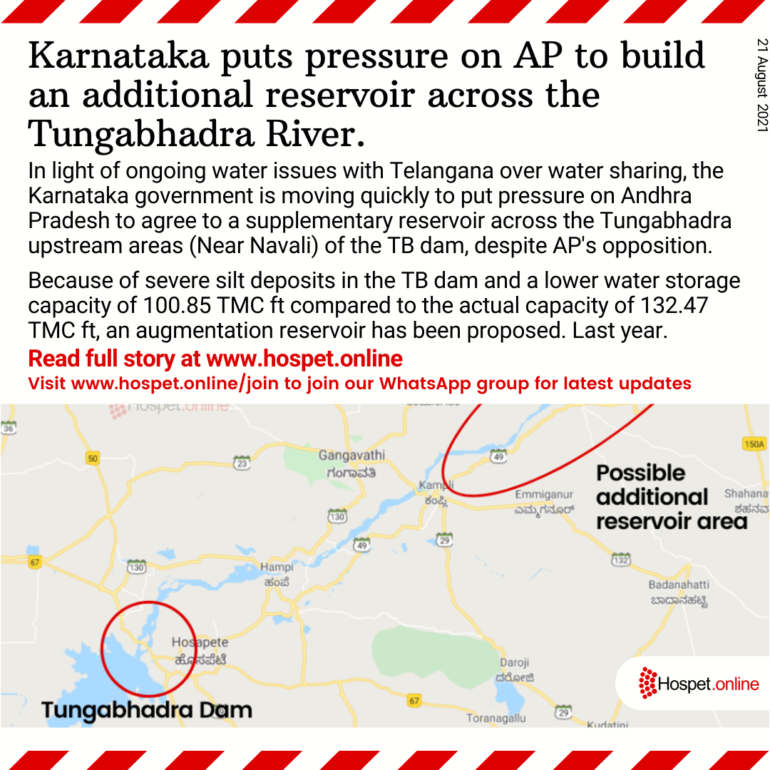 In light of ongoing water issues with Telangana over water sharing, the Karnataka government is moving quickly to put pressure on Andhra Pradesh to agree to a supplementary reservoir across the Tungabhadra upstream areas (Near Navali) of the TB dam, despite AP’s opposition.

Because of severe silt deposits in the TB dam and a lower water storage capacity of 100.85 TMC ft compared to the actual capacity of 132.47 TMC ft, an augmentation reservoir has been proposed. Last year, the Karnataka government set up Rs 14.29 crore to prepare the DPR.

Karnataka is expediting the submission of its Detailed Project Report (DPR) to the Centre, which would detail the causes of excessive siltation in the TB dam at Hospet.

Karnataka has been pushing for a supplementary reservoir across the Tungabhadra near Navali, upstream area. Despite its name, the reservoir, which has a capacity of 30 TMC ft, could have an impact on the TB dam, the inter-state project of AP, Karnataka, and a portion of TS.ntre, which would explain the causes of excessive siltation in the TB dam at Hospet.