2019 Hampi Utsav failed to evoke a good response from people.

The two-day Hampi Utsav 2019 was off to a colourful start on Saturday. But the event failed to evoke a good response from people despite efforts by the district administration.The enthusiasm usually associated with annual event was clearly missing on the inaugural day. The streets leading to Virupaksha Bazaar from Queen’s Bath, where two stages, including the main one, have been erected near Ediru Basavanna, was almost empty, except for weekend tourists.

The police personnel, who were stationed in space of every 200-500 metres, appeared to outnumber the visitors. The summer heat which has set in since last week of February also appeared to have contributed to the poor turnup, as many preferred to stay away from the event. The mercury levels soared to 35 degrees Celsius by Saturday afternoon. Even the Shobha Yatra organised to mark the inauguration of the utsav appeared dull with a small turnout although the district administration had declared a holiday on Saturday.

Many believed that in addition to the summer, the ongoing PU-II examinations and the upcoming SSLC examinations too resulted in the lacklustre public response. Ballari District In-charge Minister D K Shivakumar inaugurated the Utsav. His ministerial colleagues Parameshwar Naik and Tukaram and MLCs Allam Veerabhadrappa and K C Kondaiah, MP V S Ugrappa and MLA Somashekar Reddy were also present on the occasion.

The event is featuring 3,000 artistes, 204 shows and 80 Vasanth Vaibhav programmes. Art and photography, flower and fruit and agriculture produce exhibitions have also been organised as part of the utsav. The sand art, a new event at Hampi Utsav, has been attracting more people than any other exhibition. The monuments of Hampi — Sasive Kalu Ganapa, Ugra Narasimha, Lotus Mahal, Stone Chariot, Elephant Stable and others – have ‘come up’ at a single location in Hampi. 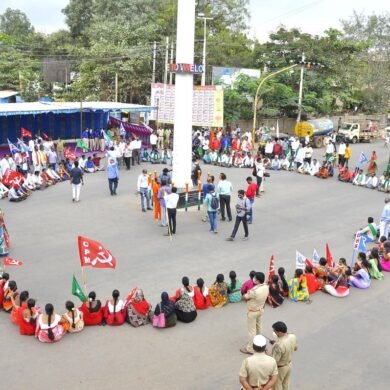