Filming of protected monuments will be free from Dec 25 to Aug 15. Hampi not on the list. 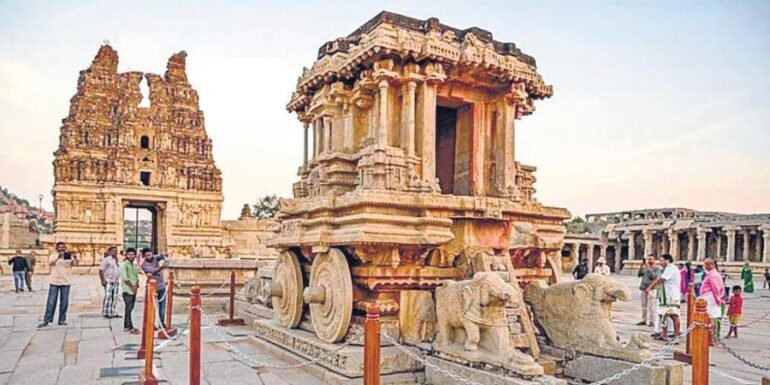 The Centre has waived the fees for shootings linked to the country’s heritage and freedom struggle at centrally-protected monuments under the Archaeological Survey of India (ASI).
Beginning with late former Prime Minister Atal Bihar Vajpayee’s birth anniversary 25 December. The exemption is part of celebrations of 75 years of Indian independence. It will continue until August 15 next year when India will celebrate the 75th Independence Day. The exemption will not be applicable at 27 sites, including the Taj Mahal, Ajanta and Ellora caves, Humayun’s Tomb, and Hampi.

“As a part of the commemoration ceremony of 75th-year of India’s Independence, people or agencies working on projects involving the heritage, national language promotion, Indian tradition and culture, freedom fighters, freedom struggle, folk music, and language and tourism will be exempted from paying fees for shooting photographs or videos at the monuments maintained by the ASI,” the Union culture ministry said in a statement on Thursday. “The exemption commences from the birth anniversary of former Prime Minister Late Shri Atal Bihari Vajpayee on 25th December 2020 to next Independence Day 15th August 2021.”

The statement said online permission is needed to carry out such shootings. It added the waiver is being provided to promote the lesser popular monuments. “…the process of issuing permission for shooting at ASI sites has already been fast-tracked. …This waiver will, however, not be applicable at the iconic sites that include world heritage sites under ASI’s management.”

Union culture minister Prahlad Singh Patel first made the announcement for the waiver last month. In a tweet, he said the decision has been taken to promote tradition, culture, and local folklore.