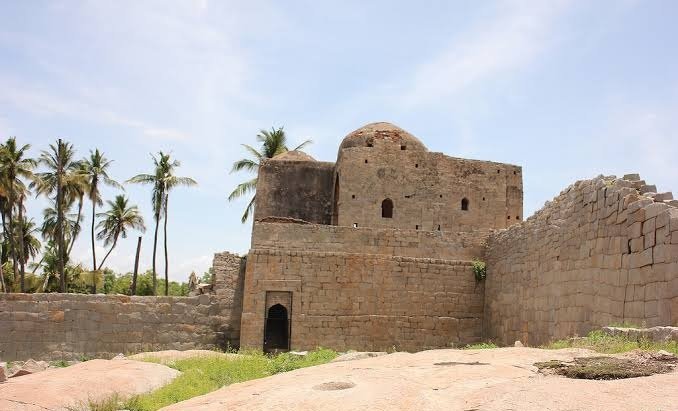 The Dannayaka’s enclosure (also called Danaik’s Enclosure) is a systematically partitioned campus. There has always been a confusion about the reason for existence of the Dannayaka Enclosure

Archaeologists and historians are at different opinions about the past of this area. The arguments vary widely. A section of the experts believes that it is here the state mint was located. And hence a portion of the campus is called the Mint.
Others believe that this was the area of the city’s administrative and high-ranking officers. That the word Danaik refers to the commander in chief or the Mayor of the city. The seat of the Danaik in the enclosure as evidence supports this argument.

Yet another school of archaeologists believes that this had been used as a military training area for the elite army. The presence of the Mosque inside the campus is shown as the presence of Muslim trainers (horse riding) from the northern provinces. Also supports this thesis is the presence of the array of granaries at the north and the Bhojanasala (Dining Hall) in the south of this area.

Whatever is the case, this area was the important inner circle of the Vijayanagar capital.
Every now and then new finds are made among the Hampi ruins, – a hitherto unknown pond, a temple, a palace structure or an inscription on a stone- questioning the current assumptions.

For example, the recent discovery of an ancient Shiva temple by the Archaeological Survey of India. The temple was found buried just west of the Danaik’s Enclosure area. A sequence of events started with clearing of this area of bushes and shrubs led to the unearthing of this temple, questioning a lot of established assumptions.

To an unsuspecting visitor, this is a sprawling compound with numerous basement of palace-like structures, crisscrossing tracks, and a network of partition walls. It’s an open barren expanse with confusing exits and entrances.

For the sake of simplicity and understanding, the Danaik’s Enclosure area may be split into three sections. The northwestern area that houses the Mohammedan Watch Tower (a very good specimen of Hampi’s military architecture), ‘The Mosque’, ‘Band Tower’, the Idgah (an open payer area), the seat of Danaik and the recently discovered Shiva temple just outside of it.
Explore the basement of the palaces. The rectangular pits around the

palaces are believed to be once secret treasures. Around the corner, you’ll see a platform to alight from an elephant. Nearby is a tank with a bull-head waterspout.
The northeast area houses the palace base of Vira Harihara. The southeast section that is popularly known as the Mint area.

Cover this on foot as part of the Royal Centre tour (See Route 3 in the Hampi itinerary map). You can enter this area easily from the Underground Shiva temple side or from the Hazara Rama Temple side.
The best option to enter the Danaik’s Enclosure is through the modest entrance at its northern wall. The unpaved road that runs along the north edge of the Underground Shiva Temple can take you to the Danaik’s Enclosure.

From the Underground Temple, a few feet down towards east the path makes a left turn around the recently excavated basements. A few feet down the path again takes a rightward turn. You can spot the exteriors of the Mohammedan Watch Tower at the left corner with the balcony projecting towards your path. The entrance to the enclosure is located just after this point.

The enclosure area is roughly about 200 meters wide and 800 meters long. Motor vehicles are not allowed beyond the above-mentioned entrance point. However, you may take your bicycle and mopeds inside. The whole compound is strewn with thorny creeper plants. Keep as much as possible to the trodden trails to avoid a flat tire.

One may not get lost, but it’s a bit puzzling to trace the complex pathways. The area is open to visitors from sunrise to sunset. No entrance fees or camera fees.

Located in the palace enclosures, this was used to climb on the royal elephant.