A rare species of lizard found at Tungabhadra river 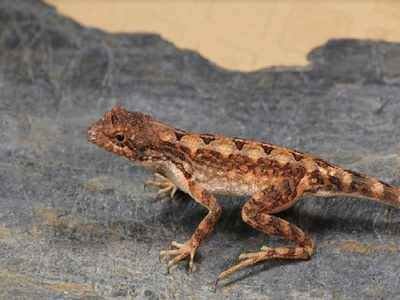 Sitana dharwarensis is a large-sized species when compared to other fan throated lizards. A species appears to be restricted to the area encompassed by the two major rivers Krishna and Tungabhadra. These rivers likely act as biogeographic barriers for terrestrial lizards.

Class 12 student who is a part of a research team that discovered the fan-throated lizard. At 17, Arya Murthy has co-authored a research paper on a new species of fan-throated lizard from northern Karnataka. Mayuresh Ambekar, Zeeshan Mirza, researchers from the National Centre for Biological Sciences (NCBS) and Arya, a class 12 student at Inventure Academy, Bengaluru, have discovered a new species known as Sitana dharwarensis from Bagalkot. The species belongs to genus Sitana and derives its name from Dharwar or Karnataka craton- a piece of the Earth’s crust that dates back to the late Archean.

“It has been an exciting journey. I have been closely following news on the discovery of new species and have always been interested in wildlife and zoology. Working alongside a team of senior researchers was truly an eye-opening experience. I learnt about lab procedure, writing style for scientific literature, and also about the brains behind scientific research. To directly be involved in the research process was a dream come true for a science student.

On challenges, he said, “Catching the lizard specimens itself was quite an ordeal. We spent hours running through and around rocks and bushes in the hot sun trying to trap them. While interacting with senior researchers was a learning experience, it took some time to get accustomed to using different lab equipment including micropipettes or PCR machines.